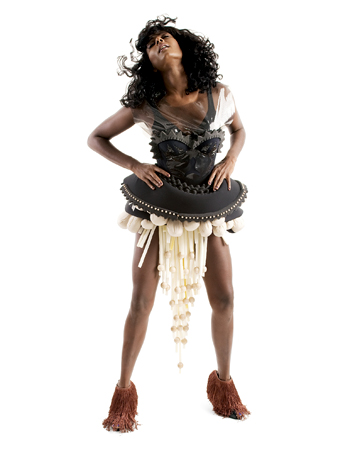 It is worth getting past the irritating fact that Club Maria continues to market two nights of music as a “festival” (Bass Berlin Festival: Fri, July 2 – Sat, July 3 @ Club Maria). Headlining on Friday night is urban dubstep trio Jahcoozi, and house label Shitkatapult takes over Saturday’s showdown. B Pitch Control picked up on the power of frontwoman British MC Sasha Perera (Jahcoozi; photo) after she recorded vocals over the Modeselektor track “Silikon”, catapulting Thom Yorke into her fan club. She’s bound to be sporting – and working the stage in a little pair of hot pants. What they call a full-on performance.

While I’m on the topic, performance artist Julia Vitalis is back for more bodily antics (Fri, July 2 @ Turn Berlin). The vagueness of what she’ll be doing for 11 hours, if not touching herself, is intriguing enough for a stop-by. Over at the Watergate, it’s a techno infusion as record label Oslo present their roster, including Montreal-born Guillaume Coutu Dumont (Fri, July 2 @ Watergate).

Time to hop on the Saturday tram, Schwarzfahren-style: you have to live on the edge to get in the mood to see Blues Rock King Dr. Will (Sat, July 3 @ Bassy Bar). His music is growly, gefährlich, and bound to make you crave adventure. Sparkasse raid anyone? And speaking of robberies, maybe it’s in your fortune to see the opera Carmen before it finishes its stint in Berlin (Sat, July 3 @ Deutsche Oper)… if you can afford it, that is. (Maybe after that bank raid?) Another, ahem, “door” of opportunity to knock on is paying your respects to Jim Morrison with some old video footage of him before he slipped into that heroin bath (Sat, July 3 @ Zyankali). Ok, stopping now with the puns. I promise.

If you didn’t see A Single Man (Sun, July 4 @ Freiluftkino Kreuzburg) around Oscar-hype time, get your bum into a sun recliner. Colin Firth is not the romantic pansy he’s been cast as before – and really gives a remarkable performance. The Papergirl Art Festival (Sun, July 4 @ Neurotitan Gallery) sounds charming. It centres on the idea of handing out rolls of art to passerbys. The “rolls” – work by 238 artists – will be on show for two weeks before “paperboys” (and girls) go on a bicycle round to hand them out to strangers. The Irish techno duo You’re Only Massive will be playing the exhibition’s opening party.

The blogosphere has gone into overdrive with appraisal posts for indie rockers The Morning Benders (Sun, July 4 @ Magnet). Maybe it’s because it’s indie pop, but I’m not convinced as every else seems to be. Still regardless of my feelings, the gig is sure to be as packed as a taxi bus in Johannesburg.

Oh, and let’s not forget, South Africa, World Cup – that big German game this weekend (Sat, July 3 @ Tentstation)… Time to put your passions down in pixels?