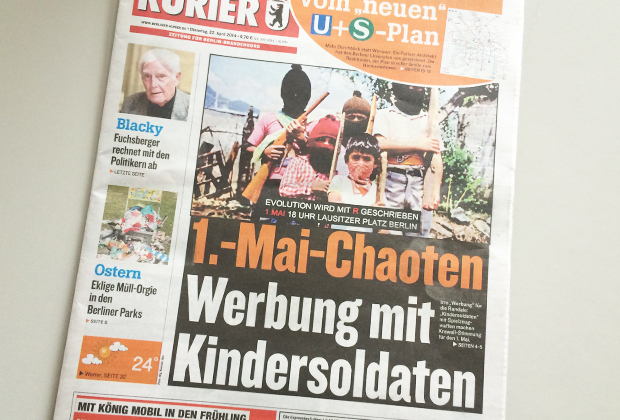 “Advertising with child soldiers!”  was Monday’s headline in tabloid paper Berliner Kurier. The “Chaoten” (hooligans) are spreading “hate propaganda” on social media to mobilize a demonstration – and inciting children to violence!

Why is a Facebook picture of kids with wooden guns suddenly front-page news? This kind of desperate sensationalism in the Berlin press can only mean one thing: May 1, a day of politicized chaos and ritualistic destruction, is just a week away! Since 1987, Revolutionary May Day has taken place in Kreuzberg, and some years it attracts upwards of 20,000 people with riots until the early morning and hundreds of arrests.

But what can we expect for this year? Here are my five predictions:

1. Another week of shocking and largely fictional reporting. While we will be working on getting the facts and interviewing organizers, much better-paid journalists from the Springer empire will make up a whole series of ridiculous stories about a left-wing mafia breeding mutant dogs to attack police. Or something. Will tabloid fiction win the day? Probability: 95 percent.

2. A small trade union demonstration. May 1 in Germany is traditionally a day of the Social Democrats and the trade unions, and they will hold a small demonstration at 10am. But in recent years, they have only brought together a few thousand people. Will hundreds of thousands of precariously employed Berlin workers come out with their unions? Probability: 1 percent.

3. A gigantic MyFest which eventually turns into a riot. The street festival was started 10 years ago by the city and the police to force the disturbances out of Kreuzberg. But in recent years, inebriated festival-goers have been more likely than political demonstrators to throw rocks. Will the festival against violence end in violence? Probability: 70 percent.

4. An endlessly massive demonstration in the evening: Last year, the revolutionary demonstration at 18:00 made it all the way to the Brandenburg Gate, with a delegation of Greek workers in the front row. This demonstration has a “black block” tradition, but the current leadership is steering it in a more political direction. This year the route will lead to the SPD headquarters to protest against the formerly socialist party 100 years after the beginning of World War I. Will they get to the end of their route without being dispersed by police? Probability: 50 percent.

5. A May Day with no arrests? Some years are actually quite peaceful. A scientific study conducted at the Free University of Berlin showed that this was the case when police held back and didn’t harass demonstrators. But it’s not very often police choose to do that. If you do get into trouble, remember our survival tips. Will everyone be able to relax and forget about these simple rules? Probability: 5 percent.

The left in Berlin has plenty to be pissed off about – including the eviction of the refugee protest camp at Oranienplatz earlier this month – and a lot of that anger will be visible on the streets of Kreuzberg next week. But the probability that kids with wooden guns and black ski masks present the demonstration? I’m going to put that one at 0 percent.

If you want to get a feeling for how Revolutionary May Day developed over the last 25 years, check out the RevolutionaryBerlin tours which take you through the area around Kottbusser Tor. The next one is this Sunday at 15:00.