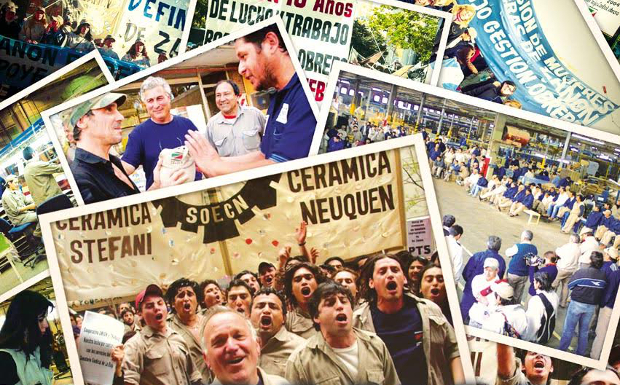 On Saturday, December 3, Wladek Flakin discusses a world without bosses at a public meeting (in German) at the Versammlungsraum im Mehringhof. For those that can’t go (or who haven’t mastered the Teutonic tongue), here’s what he thinks.

Way back in 2003, I visited a factory in the dusty steppes of Patagonia in Argentina. The Zanon Factory produces ceramic tiles. In many ways, it’s just a normal factory: huge furnaces, conveyor belts, robotic arms… to be honest I don’t have the faintest idea how tiles are produced, but it all looked extremely complicated. But Zanon was missing one thing that almost every other factory in the world has: An owner. A boss.

The “factory without bosses” (“fábrica sin patrón” in Spanish) made such an impression on me that I’m still thinking about it. This Saturday evening I’ll be speaking together with an Argentinien political scientist at a public meeting in Berlin about Zanon. A number of workers and trade unionists from Berlin companies like the Botanical Garden and the BVG will also be there.

Because Zanon is an example that is just as relevant in Berlin as it is in Argentina. Virtually all human labour, for hundreds of years, has taken place under the command of bosses. And bosses are – I’m thinking how to express this while any number of my own bosses might be reading – not universally loved.

Where do bosses come from? And do we really need them?

Sure, some bosses have worked hard to build up a company. Others though, not so much. What characterizes the big bosses – the capo di tutti capi, so to speak – is that they own the means of production, i.e. the factories, the infrastructure, the machines, the tools. And more often than not, they are in that position because they inherited wealth. Just look at the list of the richest people in Germany and see how got their positions from fathers and grandfathers.

Can society work a different way? A question asked a thousand times, but I’ll ask it again. Let’s look at Zanon.

During the economic crisis of 2001 in Argentina, the boss, Luigi Zanon, wanted to close the plant and throw his 300 employees out on the street. But the workers weren’t having it. They went on strike and occupied the facility. They needed money to survive, so they began selling stock from the warehouse. And as if by accident, they had a revolutionary idea: Why not produce ceramic tiles themselves?

All the workers were there: manual workers, security guards, engineers, even the cooks from the lunchroom. The only thing that was missing was the boss. And what did he do, anyway? In early 2002, the workers started the machines and quickly realized a factory without workers can’t run. (See The Simpsons.) But a factory without bosses can work just fine.

Fast forward 15 years. The factory – which Luigi Zanon wanted shut down – is still producing tiles. The workers make living wages, and they’ve increased the number of jobs to 500. Profits, instead of going into the pockets of a boss, have been used to provide tiles to homes and schools in the community. And all decisions are made democratically, in assemblies of all workers. People in administrative jobs are elected – so the closest thing to a “boss” is a coordinator who makes the same wage as everyone else and is subject to recall.

And yes, there are endless problems trying to run an anti-capitalist factory in a capitalist world. But, under the rules of capitalism, all these men and women would be unemployed, and that would’ve been a bigger problem for them all. Many of the workers are socialists and are fighting for a world in which all the factories are under democratic control of working people.

The Zanon workers are the most inspiring people I’ve ever met. That’s why I’ll be speaking about my experiences with them on Saturday. Because Zanon is an example that society can be run in a fundamentally different way.

Zanon, a factory without bosses – Public meeting with Wladek Flakin (in German)