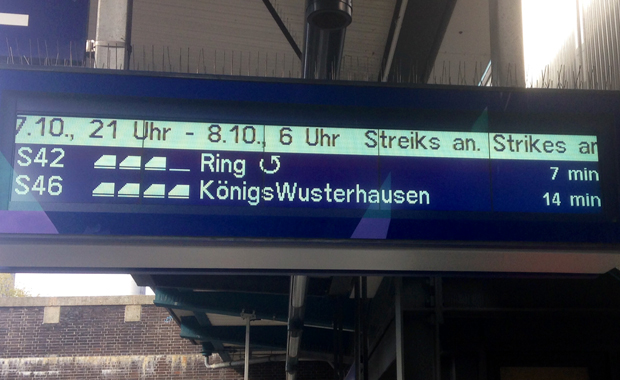 Imagine: Someday in the future, technology will be so advanced that public transport will run normally during the winter. In Berlin, however, as the days grow shorter and the waits for trains grow longer, that future seems far off…

“Dear passengers. The Trade Union of German Trade Drivers is calling for strikes. Please inform yourselves.” That was the announcement I heard, in German, when I wanted to take the S-Bahn on Tuesday around midday. I was wondering why the platform was full and the next train had been cancelled. The signs even included some information in English.

“Well, fuck this,” I thought to myself as I headed towards the U-Bahn (which is run by the BVG and therefore not affected by the stoppage). Not only is it morally repugnant to travel with scabs – it can also be downright dangerous if they don’t know what they’re doing, just see the two scabs who died during last year’s strike on the San Francisco subway.

But then I realised: the strike was only set to begin on Tuesday at 9pm and continue until 6am the next day. So the massive delays I was experiencing had nothing to do with the strike – it was just Berlin’s normal S-Bahn-Chaos. Winter is coming, and for the last five years that has meant massive delays for Berliners. And this has nothing to do with technology. As Exberliner has reported, this is a result of the S-Bahn skimping on maintenance.

Isn’t the S-Bahn a public company? Yes and no. It’s owned by the Deutsche Bahn, which is a private corporation that is 100 percent property of the German state. And therefore DB is not so much committed to providing transport as to maximising profits. The S-Bahn is heavily subsidised by tax money to help Berliners get around, but these subsidies are siphoned off so the Deutsche Bahn can invest in buying up bus companies in the Czech Republic or whatever their latest get-rich-quick-scheme is.

In the coming weeks, you’ll hear a lot about the “evil train drivers” who are ruining your commute for selfish reasons. But these men and women work terrible hours in a highly stressful job (that includes occasionally running over people on the tracks!). All they want are better wages. The press is simulating an outcry that the train drivers, like the pilots a few weeks ago, are “taking passengers hostage”. But that’s a lie. They’re striking. Stopping work to demand better conditions – it’s why unions are set up.

The Gewerkschaft deutscher Lokomotivführer (GDL) has been aggressive about its demands in recent years. They strike more often than the larger union for train workers, the rival Eisenbahn und Verkehrsgewerkschaft (EVG), which is closely connected to the train company’s management (former EVG president Norbert Hansen went on to be head of human resources at the Bahn!). Now the government is talking about restricting the right to strike: The proposed Tarifeinheit (collective bargaining unity) would only allow the largest union in a company to go on strike, destroying smaller unions like the GDL or the pilots’ union Cockpit.

For me, the train strike will mean a few long waits on S-Bahn platforms. But that was already inevitable. And if the train drivers win, there are better chances that people like me from Berlin’s Kreativprekariat will get their act together and also fight for better wages and conditions. So don’t fall for the media hype against the train drivers. They are fighting the same people who ruined our S-Bahn. They are fighting for the right of all of us to strike.

Surely, that’s worth a few minutes’ wait on the platform, right?