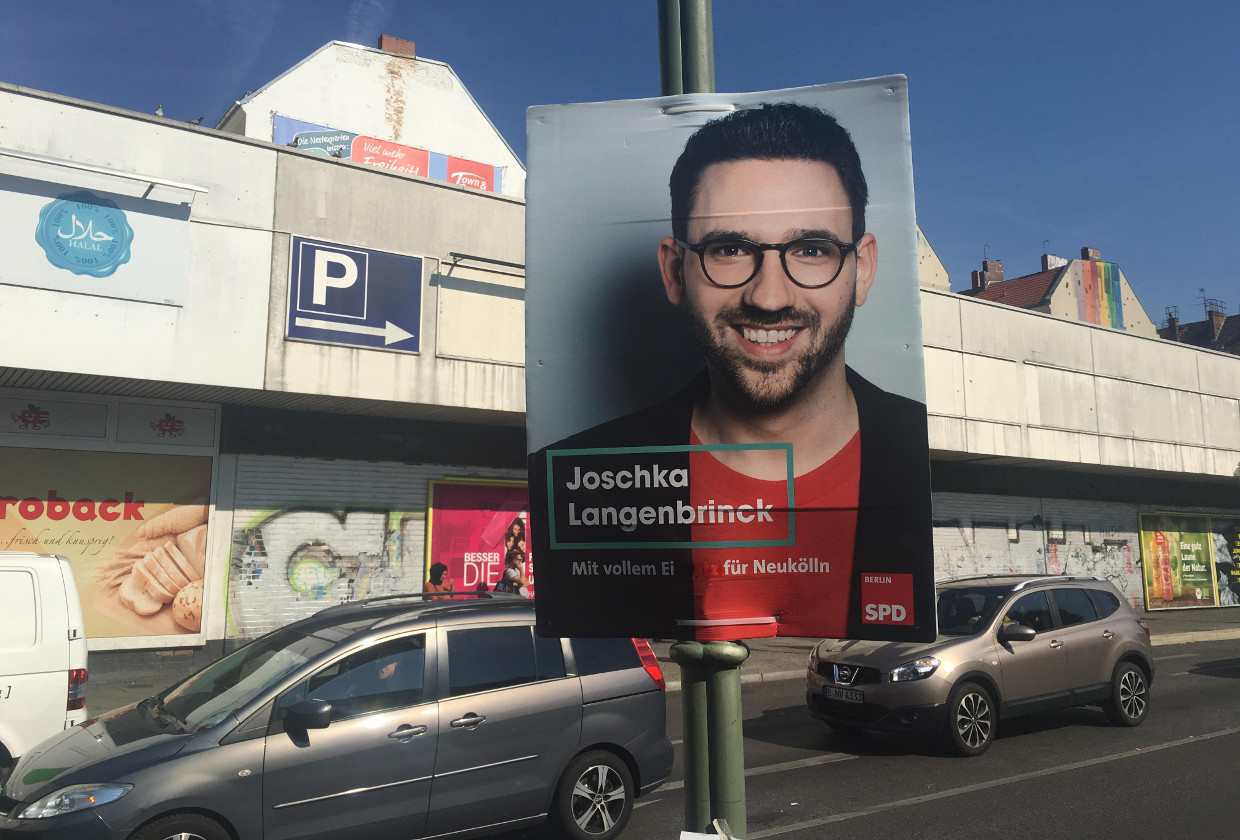 I feel so loved!

For the last month, strangers have been clamouring for my attention. Take this guy Joschka Langenbrinck – a typical Neuköllner who likes colourful blazers with matching socks. I’ve never met him before. But I’ve seen the signs that say he cares about me. He even left a note on my door saying he wanted to talk! Maybe a bit creepy, but he has a nice smile.

Who is this Joschka? Apparently, he is actually representing me in parliament. Now this is my second election cycle in my voting district (Neukölln 3) and I’ve never heard of him. He never showered me with love before. But it’s not just him. There’s also his identical twin, with the same beard and glasses, Georg Kössler. And then there’s Ruben Lehnert, who doesn’t share the look, but shares the love.

Maybe I’ve gotten prettier. But I fear there’s a more banal explanation: It’s just 11 days until the next election. And these three men want my vote for the SPD, the Greens and the Left, respectively. Well, the joke’s on them – I can’t vote. But I have been wondering – if I were to take the plunge and get the passport with the fat golden eagle on it, who would I vote for?

The SPD has been in power in (West) Berlin since 1946 until today with just a few interruptions. So no wonder our social democratic mayor Michael Müller is campaigning for continuity. His slogan – “Berlin bleibt (fill in squishy adjective here)” – seems directed at people who are happy with how the city is run. But I am not a realty speculator. I haven’t made any profit at all from skyrocketing rents and evictions. This, as far as I can tell, has been the main accomplishment of the SPD in government – and “continuity” means the cost of living will rise indefinitely.

So no vote for them (sorry, Joschka!). I also couldn’t imagine voting for a CDU whose most prominent Berlin agenda is terrorizing left-wing house projects and calling that “security”.

And then there’s the left-wing opposition. There are the Greens, who at least promise more bicycle paths. But this is the party which for years in Kreuzberg was sending the police to attack refugees in order to break their protests. There is the Left (Die LINKE), but they were in government from 2001-2011 and were responsible for endless cuts and privatizations. This time around they’ve indicated they’ll go along with anything in order to join a coalition with the SPD.

The worst part is: Pollsters assure us it’s almost guaranteed that after the elections, Müller will form a government with the Greens and the Left (“red-red-green”). So whoever you vote for, it’s a vote for more of the same.

There’s always the satirical party DIE PARTEI (which I admit I love). But I take voting too seriously to give a vote to comedians – or in this case, rappers Nico and Maxim of the band K.I.Z. who are topping their list. I doubt they want to be in parliament anyway.

So the Sunday after next, if I had a vote, I would write my own message on the ballot for the volunteers who have to count them. My current draft is: “We can’t rely on Berlin’s parties. We have to fight for our own interests.”

“So you would throw your vote away?” I hear everyone yelling. Well, just tell me who you’re voting for. Which party will give you something – anything – you want? Some people want me to vote to stop the AfD. But I’ve got news for you: The AfD is going to get into parliament anyway – they’re consistently about 10% in the polls, whether you vote for the Greens or not.

The Berlin parliament only gives representation to parties who pass the 5 percent threshold. Should we vote for anyone just to make sure a small party like the neo-fascist NPD stays under 5 percent of votes? According to Berlin law, a spoiled ballot is counted in the calculation of the 5 percent hurdle – it’s just as effective as stopping the NPD as a ballot for any established party.

Don’t get me wrong. I love all the attention I’m getting from the hipster candidates in my neighbourhood. But I don’t want to be the loser claiming: I voted for Kodos!