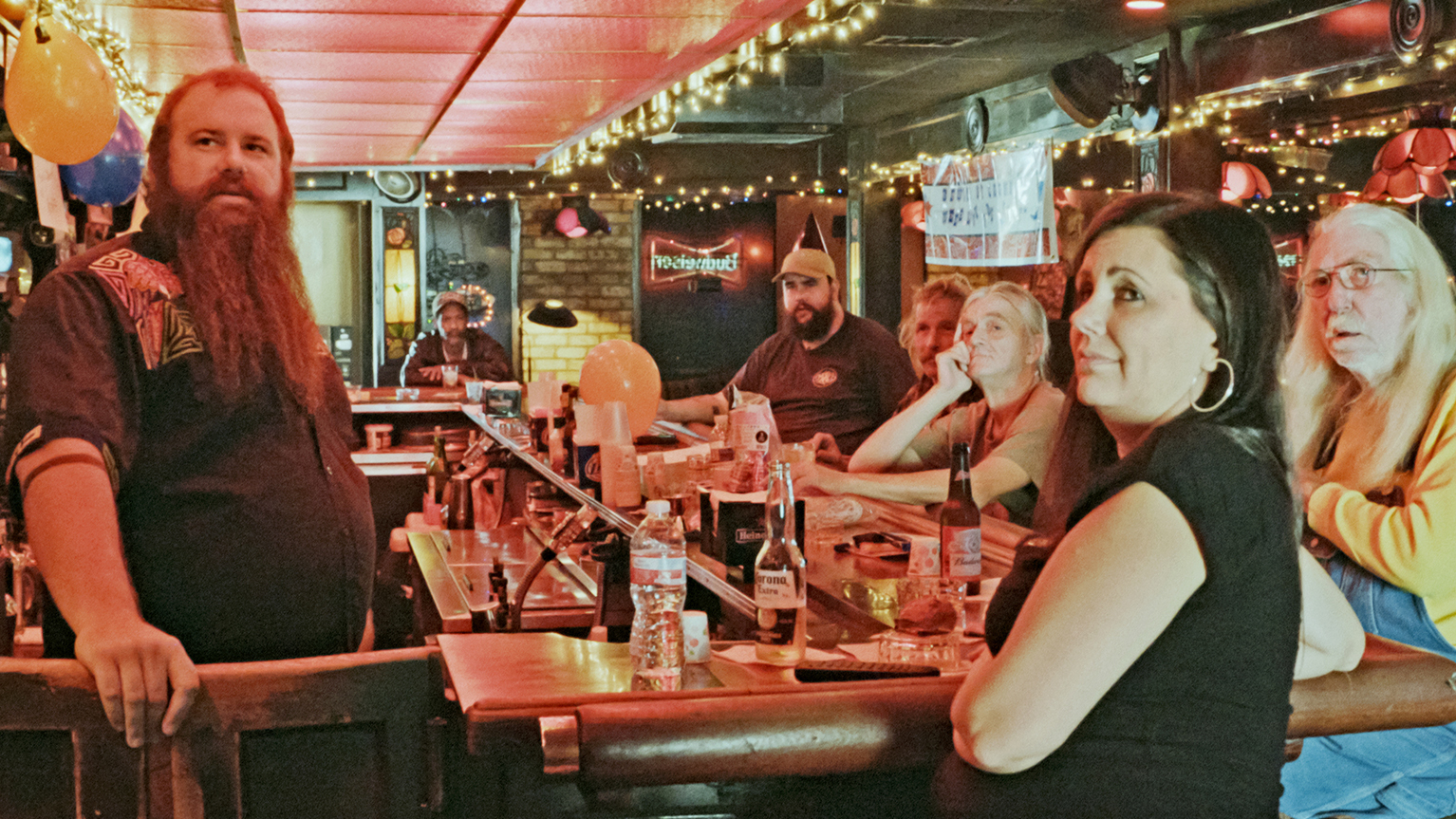 A highlight this year comes from filmmakers Bill and Turner Ross, who chronicle the last night of service in an appropriately dingy Las Vegas dive bar, Roaring 20s. Bloody Nose, Empty Pockets sees the regulars drink, argue, sing, kiss and make up, and wrestle with the fact that the place that feels the most like home will soon no longer exist. For many them, it’s more than a bar closing – it’s the end of the world.

Blurring the lines between documentary and fiction, the Ross brothers have created a fascinating hybrid. They cast 22 non-actors to show up at the New Orleans bar they’d chosen and filmed them for the duration of a day, with no script in hand. Whatever you make of Bloody Nose, Empty Pockets – semi-fiction / verité-style non-fiction / a film about a bar – all of it feels authentic, with moments of soul-baring honesty and genuine emotion when it addresses what locations and communities mean to us.

We sat down with Bill and Turner Ross to talk about their film, screening in the Panorama section this year.

Are you bemused or even frustrated when people consider the film as a documentary or feel the need categorize this hybrid movie?

Turner Ross: It’s been interesting. I think people are trying to figure out what to do with it, because they love their categories! But it incites conversation, so that’s great.

Bill Ross: We don’t see it as a documentary – we just talk about it as a movie.

TR: And that’s how we’re talking about in-house. We don’t go: “Hey, Bill – I’ve got this great idea for a documentary!” (Laughs)

Can you tell us more about the title of the film and where the idea came from?

TR: We chose ‘Bloody Nose, Empty Pockets’ because it creates an image in your head. We first started talking about it in 2009 and it’s been a long time coming. And at the time, we were listening to this great album by the Drive-By Truckers, including a song called ‘Checkout Time In Vegas’, and the lyrics are incredible. It sets a mood and it very much was in-line with what we saw on the outskirts of Vegas in 2009, during the recession which hit really hard there. We were interested in the outskirt of the shiny things, and we wanted to keep that spirit in the title.

The characters in the film feel like Tom Waits could have conjured them up – how did you go about casting this motley crew?

I cheered when ‘Waltzing Matilda’ is sung at one point in the film.

BR: Great! There was a lot of bar casting – we went all around Vegas and New Orleans, in a sort of Oceans Eleven-style “Are you in?” (Laughs)

TR: It was all about creating the most dynamic scenario and the most perfect human alchemy so that these 22 people respond to each other. We had an archetypal breakdown, a sort of human map of what tat might look like. Our initial setlist was a bit bigger, but it was about how these people were going to respond to each other, what they needed to bring. Our primary shoot that everything was built around was a non-stop, unbroken, two-camera 18 hours. We needed to forge these independent alliances before we forged this bigger alliance.

So there was no rehearsal process at all?

TR: No rehearsal process or words on page. Before we embarked on the main shoot, we had each of them individually come to the bar and sat down with them and did long interviews, get them comfortable in the space, spend time with the camera… We got to know each other and got to know what we were looking for with them as people, and what they might bring. The premise was pretty simple: “Here’s who you are. Here’s why you’re here. This is a place that’s important to you, and at the end of this, it will be gone.” And some deep feelings were shared in this this temporary community we created.

There’s a definite sadness linked to the sense of belonging and this loss of a space. Something else was being lost at the time as well, since you started filming straight after Donald Trump’s election…

TR: That’s correct. That was the conversation everyone was having out loud at that moment in time. It’s a divisive time and everybody’s responding to it. He’s mentioned in the film, but we wanted to hear about what we’re talking about underneath that – where are we and what is actually the state of the union? And let’s not stare directly into the blinding light of this thing. Let’s just see where we are as human beings.

BR: There was a lot of editing. We pulled back on that quite a bit. It was very fresh in everyone’s minds, but we wanted the film to be more timeless and to go deeper into that would have been to plant the film in a way that wasn’t interesting. I don’t want to watch that movie where we just sit around and talk about that.

TR: Because it’s also a movie about a bar and something much more universal. It’s about these safe havens and the places that we choose.

The bar itself feels like a character in this movie, which has a definite theatrical feel to it.

TR: I thought a lot about it like that, because when we talked about this initially, we were talking about Eugene O’Neill. This is basically just a stage for a moment.

BR: Yeah, some of that was planned and some of it was just what happened to be playing on cable at the time. And the better stuff was always the serendipitous stuff. We included a movie called The Misfits on there, which spoke to the themes we were trying to get at…

The song choices were great in this respect too, as you get the classics at first with the older regulars and the tracks gradually evolve when the younger patrons arrive. Can you tell me more about how you go from Tom Waits to the Spice Girls?

BR: (Laughs) (To Ross) I told you that was going to get a response!

TR: (Laughs) Everybody wants to talk about the Spice Girls!

BR: Those choices weren’t really ours. We tried to keep the jukebox off so we could edit the film, but about 20 minutes in, everyone in the bar mutinied and said it was not going to be a bar without the jukebox on! But you’re right – it’s funny how the music changes during the day: all the old-timers are listening to the 60s and 70s tunes, and once the younger crowd gets it, the music changes with them.

Speaking of younger crowds, why include the kids in the alley behind the bar, other than the fact one of them is the bartender’s sons?

TR: We wanted to see the full spectrum of people and the evolution of age and time. Those kids aren’t allowed in the bar, but when they get to the right age, they’ll be in a bar just like it. It’s about looking at what they’re choosing to do before they do that. Like the adults, they’re still finding community, still being misfits, talking about existential things that are on their mind…

BR: And we were those kids at one point, hoping to get into the bar!

Have there been any reactions to this film that have stuck with you?

TR: The criticism is good and it is wonderful to have people intellectualise and talk about it, but the more moving and meaningful situation is when you have a grandmother come to you and say: “I may not look like it, but I’m one of those people and I know that space.” Also, the really incredible thing is seeing so many young people come talk to us…

BR: Kids love this movie! I don’t know what I thought our audience was going to be, but I didn’t ever consider 20-year olds! Kids were just running up to us and saying “This is the best thing ever!” (Laughs)

TR: Yeah, and it makes you think about what their experience is like… They haven’t had enough time to spend in these places, so that’s fascinating. So, we can have completely different conversations with a multitude of people about this film. That’s pretty awesome.