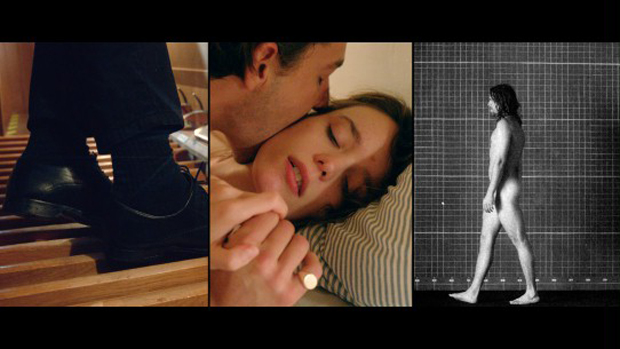 If David O. Russell’s American Hustle exemplifies the erotics of politics, then the director’s cut of Lars von Trier’s Nymphomaniac Part 1 reads like a politics of the erotic (its follow-up is rumored to be premiering in May at Cannes). And there is a lot of talk of reading. And fly-fishing. And books about fishing that are mentioned in novels about courtship – it’s like My Dinner with Andre with cunnilingus. Those expecting a one-hander will be pleased by the patches of what looks to be unsimulated sex (the credits claim that only the unfamous participated in actual coitus. And that no animals were harmed during filming. These points are not unrelated), but it’s more of a philosophically materialist two-hander between Charlotte Gainsbourg’s title character and Stellan Skarsgård’s shabby, kindly intellectual almost-Jew. Or is he kindly? He’s certainly engaged by Gainsbourg’s character Joe’s 1001+ nights. Their high-handed discussions could easily be drowned out by the continual coitus of Joe’s younger self, played by Stacy Martin, who more than resembles another former model, Jane March of The Lover, particularly when she’s coquettish in pigtails. These sort of meta-fictional intellectual diary films a la Godard’s La Chinoise are difficult to pull off, as the actor needs to maintain the discourse along with the role. But I can’t recall either actor being better, out-acting an inverted homage to Anne Severson’s Near the Big Chakra aka “The Cunt Movie” featuring a parade of penises. Much of the dirty stuff – and extra 25 minutes and another 10 inches – will be removed for general release which, to be honest, could really destroy the film – unbalancing it in favour of Christian Slater, as Joe’s beloved father, shitting himself. It would be a crime (that, as in von Trier’s films, must occur) as this is something of a Lars’ Greatest Hits with satisfying riffs on favourite topics from the Calvinism to the inevitability of behaviourism to the falseness of narrative (and malleability of form) to female masochism as social rebellion to the tragicomedy of family dysfunction to office work. Plus so much young fucking, it’s not only a film Woody Allen would never be allowed to make these days, it’s one he’d need court supervision to view.

Oh, and as an eager dick, Baghead La Beouf is very good. I’ll cut him some slack – he’s no Hitler and there’s some bit of good to be reminded of once in a while that Der Führer wasn’t just a punchline in a Mel Brooks movie. The internet driven rages we fall into over celebrity eccentricity are only going to increase as history recedes into the narcissistic risk of the personal screens.

There is not only, pax von Trier, a continual battle against soul-death, but real death in this world. We are, as Nymphomaniac Part 1 unsubtly insists, animals. If you can stomach it, what is being called the definitive restoration of German Concentration Camps Factual Survey, constructed from Allied military camera footage taken during the liberation of the Bergen-Belsen, Auschwitz and associated, is a must-watch, though you’ll never desire to see it again. Aware of death camp burnout – the Germans have been watching this sort of thing on TV between cartoons for the last 60 years – the restoration team is grudgingly hyping the ambiguous post-production input from Alfred Hitchcock, whose films contained considerably less dread. Created through the impetus of Baron Sidney Bernstein, no one seems to know how Hitch was actually involved – contrary to most information, he’s not credited as director (but my notes in the dark, per usual, are unreadable). There is one shot that foregrounds a Burgermeister’s nose while piles of emaciated corpses lie behind it that seems very much of his vision. But aesthetics (strong as some of the camerawork is) is beside the point. May the next asshole one-percenter who compares Obama to Hitler have Factual Survey run as a loop in his dreams.

Then there are those concerns greater than sex and death. For example, the souls of whales. And the Korean iron ore industry. Kelvin Kyung Kun Park’s Cheol-ae-kum (A Dream of Iron) is an extremely quiet meditation on the spiritual connections between mankind’s rendering (both definitions of the term) of the animals, specifically whales, and its connections to our material and spiritual focus, with much of the film documenting activity at steel mills, monk meetings and naval design factories in a manner simultaneously banal and honestly poetic. The film is like a less gimmicky Koyaanisqatsi – ship’s hulls mechanically raising to the heavens and the like – only overlain with a voiceover that muses on a dead relationship (the girl became a monk) and ideas such as whether by killing whales and putting them in our art, we then elevated them. How wedded to these ideas is Park? At the Q&A he confessed that he thought these Malickian musings would somehow make the film more commercial. “I want the audience to actually make their own meaning. To participate. But I guess I was kind of faking it. It seems like a kind of bait. To catch you.” To paraphrase Skarsgård in Nymphomaniac Part I, a light lure needs a heavy line.