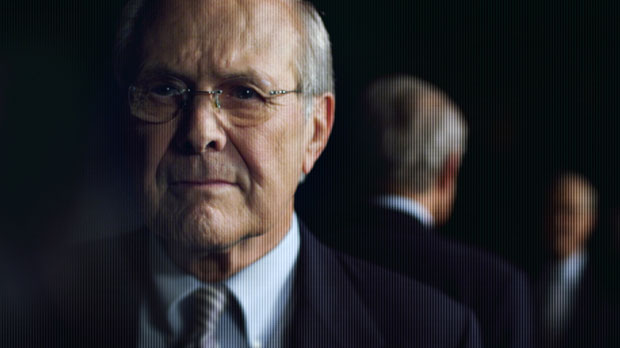 The question that appeared to be on everyone’s mind after the screening of The Unknown Known, Errol Morris’ current documentary on the intertwining of the dryly Midwestern Donald Rumsfeld, his archive, and the last several decades of American military history, was “Why?” Not, “Why were we in Vietnam or Iraq?” questions Morris has attempted negotiations with, but why did Rumsfeld subject himself to his affable interrogator, with his palpably affable perturbation? Morris, present after the screening, didn’t know, but he possessed a theory: “Vanity,” adding, “After all, if you like to hear yourself talk, this is the opportunity to talk more.” And Rumsfeld does come across as someone in love with his own voice, offering up curt, satisfied smiles during his aphoristic obfuscations; with his famed “Known knowns/Unknown knowns/Unknown unknowns” conflagration that gives the film its title, Rumsfeld comes across as the Gertrude Stein of the neo-cons, his brain a tangle of red tape, reflected in his wordplay.

As something of a smug aphorist myself, this word salad, which the audience generally accepted as banality, increased Rumsfeld’s appeal to me – I know the feeling of spewing nonsense for months until realizing what I want to say. But what Rumsfeld might have wanted to say – or more specifically, wanted to communicate – we’ll possibly never know. Morris implies he may not be aware himself: an archive of 10,000 memos, many of which Rumsfeld reads for the camera, and he never broaches the subject of what the specifics of the initial non-existent evidence of Saddam Hussein’s chemical weaponry actually were. When there’s a problem, he blames faulty intelligence, but leaves it vague. There’s no shortage of Rumsfeld on camera – I wish Morris had touched on his time as Washington’s attache to Hollywood, hobnobbing with Sinatra – and when Morris catches him in a contradiction, unlike Robert McNamara’s repeated mea culpas over Vietnam in Morris’ The Fog of War, the former Secretary of Defense who once sported designs on the presidency can plead nothing but a curiosity with his own life.

Formally, the film sports the usual Morris mixture of austerity and the puckish illustration of the wayward phrase – Rumsfeld called his memos “snowflakes” and Morris occasionally cuts to a snow globe containing the Washington Monument – though Danny Elfman’s aping of long-time Morris collaborator Philip Glass with his soundtrack can plunge the film into self-parody. Rumsfeld repeatedly returns to to Vegetius’ “Si vis pacem, para bellum,” a phrase I suspect he was exposed to as a young man at Princeton and never let go, but little is said about the specific incompetence of his war plans – the scaling back troop levels and such. When he informs Morris that he never actually read John Yoo’s infamous torture memos, an astonished (or exasperated) Morris lets out a strangulated “Really?” After the film, Morris concluded that he believed him. He considers his documentary a horror film.