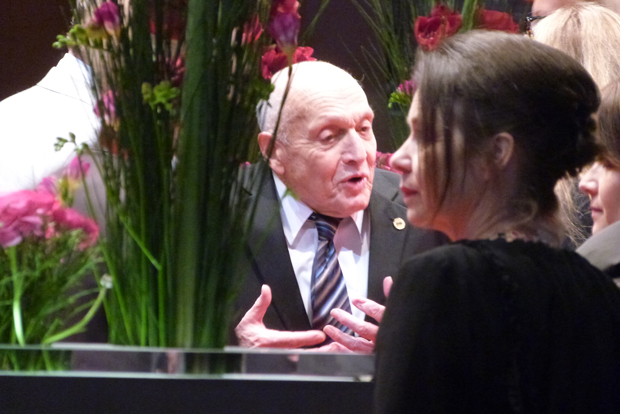 Nespresso sales are up, ladies and gentlemen: George Clooney and Matt Damon are in the house presenting Clooney’s written, directed, and acted The Monuments Men. “Based on a real” story, they were joined this evening on the red carpet by the last surviving real monuments man: Harry Ettlinger (see photos). Putting his story on screen are Clooney and Damon, plus Goodman, Murray, Balaban, Bonneville and Dujardin), playing soldiers brought together during the latter half of WWII to find and then restitute art stolen by the Nazis to its places of European origin. The point being that the Russians had their own trophy brigade to find art, but decided to keep what they found. But as Matt Damon’s character points out: their war cost 20 million casualties … entitling them, apparently, to hang on to the odd Rembrandt.

An iffy equation, especially bearing in mind one of the film’s opening sentences: that no work of art is worth a human life. A sentiment relativized pretty quickly when the first good men go down for the greater good of saving Cezannes and Michelangelos for posterity. Thereafter, so the implication, there’s additional ‘real’ unfinished business to take care of.

In addition to fudging sentiment and ethics, the film has two principal failings: it moves too smartly from boot camp in the UK, to occupied then liberated Paris where Résistance fighter Claire (Blanchett) joins the struggle, on to Bruges, Ghent, Aachen, and onward to various underground sites used by the retreating Nazis to store the treasures for the planned Führermuseum in Linz. There’s no time to develop empathy – in a story that absolutely depends on the sympathy factor. Then there are tonal insecurities: trying to establish the heroic “chaps, sports and fellows” Dambuster atmospherics with actors known for deadpan comic work (Balaban, Goodman, Murray) is just a bad fit. Too often, it feels as though the film can’t bear to choose between appropriate gravity and the wasted wisecracking potential lurking behind the furrowed brows of its heroes. A more minor point is the film’s tendency to switch locations that latterly all look rather similar (rubble, rubble, toil and trouble), requiring a lot of labelling and batons pointing at maps.

George Clooney has a directorial reputation to safeguard. (Ides of March, Good Night and Good Luck). After this, it may require a little restitution of its own.

The press conference was fun. But Ben already blogged that.