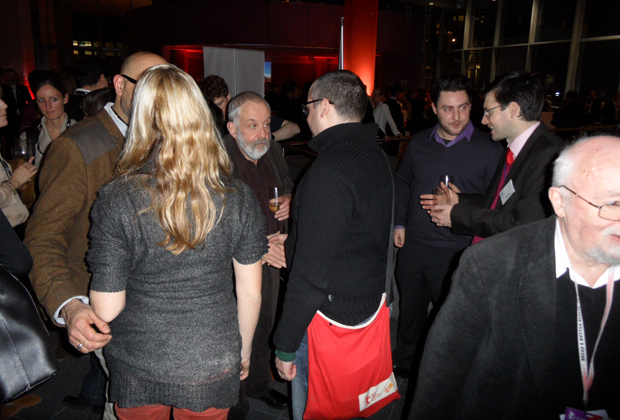 Well, I hope you’re happy. I have now completed my misery at this year’s Berlinale. Roll on 2013, when I will be aiming to contract a serious illness for comic effect. Not content with debasing myself before German Hollywood favourite Udo Kier, I leapt straight into the eye of the storm last night and managed to make an idiot of myself in front of the president of the Berlinale jury himself.

Yes, my achievement on Tuesday evening was to successfully convince Mike Leigh, director of fully one third of my all-time favourite movies, that I am a halfwit, incapable of formulating a coherent thought. I am over the moon. That’s one more item off the bucket list.

Above is a photo of me with Leigh, taken by an innocent bystander at the British Embassy reception in honour of the 24 British (or co-British) film projects at this year’s festival. In this picture, I am telling seven-time Oscar-nominated Leigh that I am his “biggest fan,” and burbling incomprehensibly about how I once memorized Johnny’s “apocalypse” monologue from the movie Naked.

I know, I know. Please don’t judge me. I suffer from a mental illness that reduces my brain capacity by 65 – 70 percent in the presence of artists who have enriched my life beyond comparison. Free embassy booze, it should be noted, can be a double-edged sword in these situations.

The thought you can make out forming in Leigh’s head is, “Please leave me alone.” What he actually said, all he said, was, “I have to go now.”

Then he was gone, leaving me to contemplate my fate.

And to think that just a couple of hours earlier I was cringing for a young Austrian reporter who jumped the barrier to give Meryl Streep flowers at her press conference. Ha! Amateur!