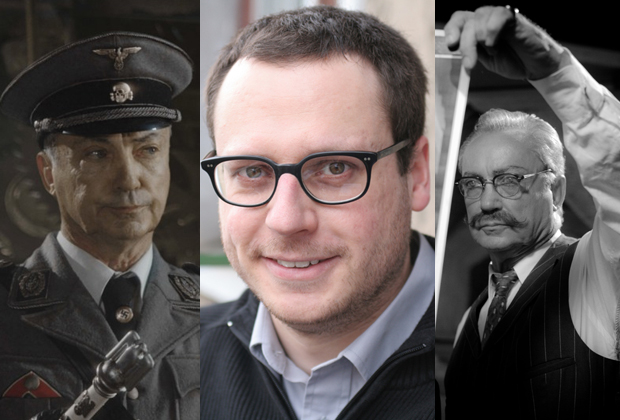 Contact between film people and media people at the Berlinale comes in three modes – the press conference (requirement: press pass), the group interview (press pass + charm + PR friend on the inside), and actual one-on-one interview (press pass + charm + friend + deep-throat prowess). All of them are essentially ritual-humiliations – I don’t know why PR companies and distributors don’t just make reporters put ash on their heads or submit videos of themselves on the toilet.

But today, in a group interview with Guy Maddin, director of My Winnipeg and presenting “Keyhole” at this year’s festival and Udo Kier, star of Maddin’s Keyhole and brilliant comedy Nazi in Iron Sky, I can proudly say that I managed to utterly out-humiliate every reporter ever. Basically I’m the journalist-Jesus – I sacrificed my dignity so that others may live, safe in the knowledge that they’re not, and will never be, me. This bread is my self-respect: eat and rejoice.

My messianic pretensions are melodramatic. All that happened was that I got kicked out. For asking Udo Kier about the wrong film. One of the main DOs for film interviews is try and be arsed to watch the film they’re promoting. Unfortunately I was prevented from seeing Keyhole by about 400 of my peers who got there before me. I therefore had no choice but to ask Kier about Iron Sky, while Guy Maddin, genius director of deep, important films and assorted journalists waited with varying degrees of patience.

After graciously answering my question by wittering on in auto-pilot about his mother and chocolate and what his character name “Kotzfleisch” (puke-meat) means, Udo asked me why I hadn’t asked anything in the press conference yesterday.

I coughed and grinned.

“You had something better to do?” said the acting legend to the expat blogger. I laughed one of the hollowest laughs any non-suicidal man has ever laughed, and stabbed myself in the eye with a nearby fork.

Luckily this gave me a perfect excuse to leave. With blood streaming from my facial wound, all I had to do was allow the annoyed PR people to shepherd me out as I was, blind and pathetic, like some rubbish Oedipus. But even so, I could still make out the black marks forming against my name in their passive-aggressive heads.

I have now decided to take up a career in alcoholism. I might actually be good at that.