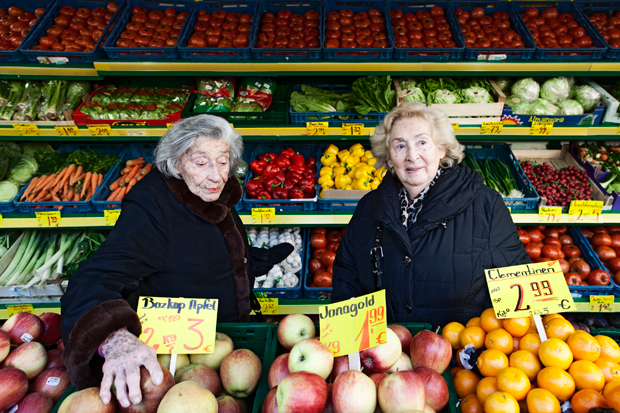 One of the sub-plots of Berlinale 2012 is how two crowd-funded movies have managed to generate the biggest media resonance.

But while the Mel Brooks-ish moon-Nazi comedy Iron Sky was presented in the Panorama section, and allocated a press screening plus conference, Oma & Bella – now featured in the Bild, Welt am Sonntag, Variety, Tagesspiegel, The New York Times, and Exberliner – had to make do with the special interest section of the programme – “Culinary Cinema”, where it was given just two screenings in a lecture hall in the Martin-Gropius-Bau.

But a hot ticket is a hot ticket, and the audience at the second screening was positively chirruping with anticipation as its last members were squeezed in.

And the hype is deserved. Alexa Karolinski has made a thoroughly moving portrait of her grandmother and her best friend, two octogenarians who live together in an ornate and immaculate Berlin apartment, and cook extraordinary amounts of food for their extended family.

Obviously, you’re unlikely to see a film made with more love for its subject matter, but Karolinski also has the skill and sensitivity to find and convey their intuitive relationship. This becomes very clear in interspersed scenes when we see Oma and Bella side by side in armchairs against an abstracted black background.

Sitting square on – it becomes clearer how their physical differences define their characters – Oma sits proudly upright, head high, looking down, while Bella is hunched over, looking up all sly and impish.

But the subject of the film is really a little darker and more tragic than the many delightful scenes, when we watch Oma and Bella – apparently always in huge sunglasses – at the hairdresser, on a Berlin boat tour or just taking out their trash.

The film is about their memories of the Holocaust, and the constant tension between the pain and the importance of talking about the past. Karolinski says that Oma and Bella only agreed to make the film on the condition that she did not ask about the Holocaust. That condition seems to have been vital to the success of the film, because it means those memories appear in the film much more organically.

This tension produces a lot of extraordinary moments: Oma and Bella visit a friend, an Auschwitz survivor, who suddenly – while dealing playing cards and drinking tea – remembers how people used to ask her whether the number tattooed on her wrist was her phone number. She then declines to say anything else, but the scene seems to have a visible effect on Bella.

The most powerful scene is when the two begin to tell of the end of the war, when the Russian army apparently told the Holocaust survivors they had two days to do what they want, after which order would be restored. Oma describes this brief hiatus of revenge between war and peace as a time when normal life was suspended. “Two days were enough,” says Bella, and suddenly we have a tiny glimpse of an emotion much darker in this fragile, lovely old lady.

It’s still unclear whether this film will get the distribution it deserves, or whether it is destined to make the festival rounds before disappearing. You’d think the media interest would at least give it a TV airing at some point or another. Let’s hope it gets that and more.