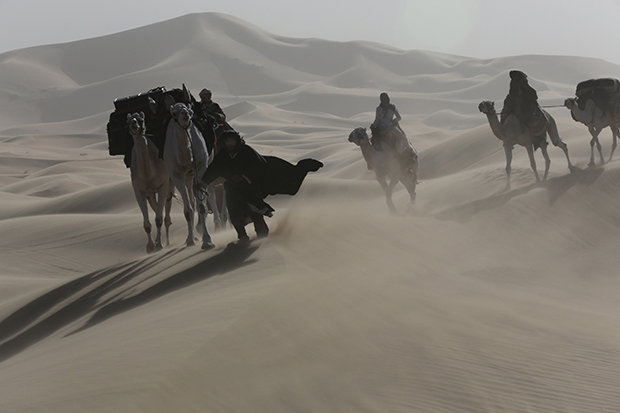 Legendary German director Werner Herzog returns amid fevered anticipation with a biopic of famed British traveller/archaeologist Gertrude Bell to this year’s Berlinale. What turns out to be most surprising about Queen of the Desert is not the fact that Herzog, known predominantly for his male-centric, hot-blooded filmography, decides to train his focus on a female protagonist for a change, but just how unapologetically, almost gooily old-fashioned his approach to the project is. After a quick set-up of the geopolitical backdrop surrounding the collapse of the Ottoman Empire in the early 20th century, we jump 12 years back in time to find a young, rebellious, fiercely intelligent Gertrude suffocated by the prospect of a domestic life. Her father indulged her wish to be out in the world and sent her to the British Embassy in Teheran. Little did he know this would be the beginning of a lifelong, ever deepening passion to explore and perhaps, to escape.

The narrative is strictly linear, at times pedantically so, moving from one milestone to the next. And with all the stations of her life the film tirelessly chronicles, it does get caught up in details and can be pretty exhausting. What’s potentially an even bigger turn-off for viewers is the grand emotions that are poured into many of the scenes. Shot against vast deserts, gorges and other literally awesome geological formations, the words and gestures of affection the characters share often prove even larger. And the way Herzog milks every last drop of romance out of candlelit interiors or windswept exteriors might be a bit much for those with a low sugar tolerance level.

That said, there’s plenty to admire about a production that so painstakingly recreates the opulence of a bygone era and so earnestly seeks to make sense of a woman’s lonesome path. The art direction of the film is superb. From the granite baths and silken drapes of the various estates or diplomatic agencies to the fragrant bustle of a Persian bazaar, the set pieces look exquisite and are often cast in a delicious, soft glow. Nicole Kidman carries the film with great confidence, reminding you in just a handful of key scenes- notably the textbook “devastation-upon-hearing-tragic-news” reaction shots-  what tremendous, nuanced control she has over her physicality. As the love of her life Henry Cadogan, James Franco is also in fine form, with his usual smarm reduced to a rare minimum. All in all, it’s a worthy competition entry that should delight some for being pretty, thorough, dreamily traditionalist and draw the derision of others for those same reasons.

Coming off the success of critical darling Weekend, British writer/director Andrew Haigh’s comes back with another relationship drama 45 Years. Again it’s all about two individuals and the changes in their understanding, appreciation of each other. Only this time it’s a man and a woman at the center, and instead of marking the beginning of an affair, it maps the downfall of a decades-long marriage. Kate and Geoff Mercer are a week away from celebrating their 45th anniversary when the news comes that the body of Geoff’s previous love Katya has been found frozen in a Swiss glacier. For him this stirs up all kinds of buried memories and regrets, but it might prove even more difficult for her to come to terms with a man she suddenly sees in a new light.

The premise of the story packs an instant hook and promises all kinds of insight into the human mind. In execution it’s significantly less exciting, as Haigh fails to fully substantiate or make relatable the doubts and fears of these characters. Hammering repeatedly on a phantom from half a century ago that should all of a sudden become the unnamed shadow of their married life and deal the final blow to their relationship is not entirely plausible, making their sulks, distress, breakdowns look like a petty case of jealousy. The insufficient plotting also contributes to a padded feel, damaging for a film running just over 90 minutes. In contrast to Weekend, which was also a simple story with few complications, this time around the emotional force that should drive forward the narrative mostly just isn’t there.

As Kate, Charlotte Rampling is her old magnificent self. Her portrayal of someone slowly unraveling is technically impeccable and as always a joy to behold. Smartly ending the film on her face, the film manages to capitalize as much on that mystical, slightly unsettling appeal of hers as possible, but eventually the limitations of the role prevent this performance from being a clear knock-out. As Geoff, Tom Courtenay fares considerably less well, coming off strangely robotic in many scenes. On rare occasions the strengths of Haigh and his cast do come together though. The last stretch of the film, for example, offers a couple of penetrating looks inside Kate’s seriously ruffled psyche, sending jolts of electric currents through a restrained if lax narrative. It’s a shame, then, that these moments are too few and far between to piece together an altogether more compelling picture.