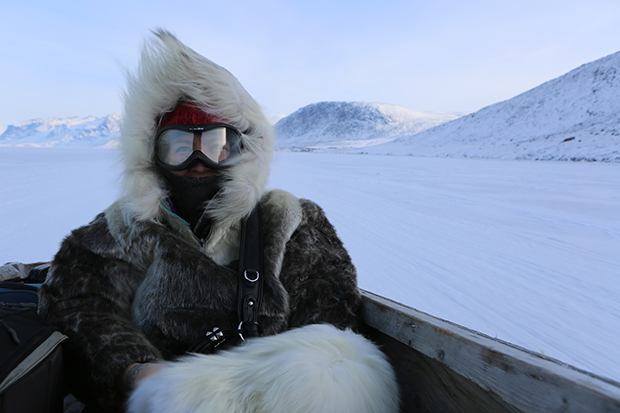 Inuit never get angry. In the old days, when they took offence, they used to bang a kind of flat drum that flips over and hop around while making sarcastic comments, in a kind of gentle folk rap battle, but colder. Sadly ironic piss-taking, with or without traditional drums, doesn’t always work against multi-nation trading blocs and the well-funded lobbying power of Greenpeace. So, faced with the EU’s ban on “commercial” seal trading – a ban that has destroyed their living, driven up unemployment and suicide rates, and caused massive health problems as people end up eating junk food – the Inuit of northern Canada had to “learn the language” of social campaigning and find a way to save their communities.

That campaign is what the documentary Angry Inuk (running in the “NATIVe” indigenous cinema section) is about. At the screening on Sunday night, director Alathea Arnaquq-Baril told the greying German environmentalists in the room that they were going to have to “be brave”. Not only because the film contains scenes in which seals are shot and thoroughly de-organed (“Look, there’s a bit of brain of left,” says a delighted hunter before stuffing some shattered mush into his mouth, while babies are fondly photographed with seal blood all over their faces like jam) but because those Green Germans were going to have those 60s views challenged – and in some cases, as the post-movie Q+A showed, changed. “German MEPs were instrumental in getting the ban put in place,” Alathea said to me. “It was important for me to screen here in Germany for that reason.”

Seal-hunting, it turns out, is one of those issues where everything you know is wrong, mainly because the incomes of big environmental organizations depend on feeding you misinformation about it. Inuit no longer hunt baby seals, and yet those weepy little helpless faces feature on animal rights stickers everywhere (it doesn’t help when Paul McCartney has his photo taken next to them either). The seal species that Inuit hunt aren’t endangered. There are millions of them, and the 130,000-ish Inuit in the Arctic today would never be able to endanger them.

Also, the new liberal Canadian government isn’t helping. “I tend to feel about the Trudeau government the same way I feel about Greenpeace,” said Alathea. “Greenpeace apologised for all the damage they did to the indigenous economy two years ago, but they haven’t done a damn thing to reverse that damage. I’m not interested in pity. I want them to work to reverse the legislation and those campaigns they started and popularized back in the 80s.”

In fact, seal-trading is one of the few sustainable, organic businesses the world has left. It’s definitely less environmentally-destructive than, say, mineral and fossil fuel mining, which the impoverished Inuit have turned to for a living. Even for a non-activist, it’s a bit soul-destroying to find out that Greenpeace is, on this at least, part of the problem.

The film’s biggest insight, though, comes when the meetings with MEPs make clear how the conscience-saving exemption for “own-use” hunting that the EU built into its sealing ban is actually a sign of Europe’s unconscious racism. The reality behind the image of an Eskimo going out on happy hunting trips from an igloo is a life of miserable subsistence. But the governments aren’t the cause of the damage, Alathea says: “It’s the attitude, the condescension, and the hypocrisy of the animal rights movement, who very, very consciously erased Inuit from the image of seal-hunting – they are the cause of the problem.”