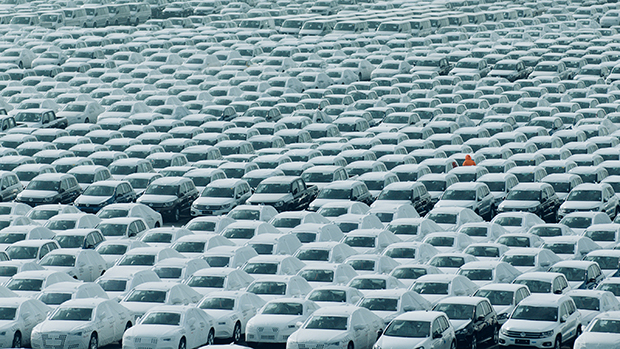 Everything about the Swedish film Yarden (The Yard) is modest: its place in the Berlinale, down in the lowly Forum section, its 80-minute run-time, its monosyllabic dialogue, its tone that takes a dead straight path between comedy, despair, realism and absurdity, never allowing itself to stray a measure one way or another. Director Mans Mansson seems to be the soberest of filmmakers – too honest with his own talents to allow himself any flourish. Every time a strong image or musical cue does offer itself, he carefully cuts away like a cleric wary of being seduced.

This self-restraint makes him not unlike the central character, a middle-aged poet who has calmly reassessed his own collection, matter-of-factly written a review trashing it (“It’s a shit book,” he says with a shrug), incinerated the few copies he can’t give away, and found a menial job that otherwise only immigrants will do. From here on in, the film becomes a brief but subtly brutal allegory about modern capitalism.

The work all happens in a vast and un-picturesque yard, where the workers drive and park newly-manufactured cars – each one covered in a protective plastic casing, like the workers themselves, who occasionally resemble Guantanamo inmates in sensory deprivation suits. The film efficiently shows how restrictive the new work is – in an early scene the boss reads out a suffocating set of regulations designed to make sure the workers barely touch the cars they are driving.

Although the film also detours hilariously into immigration, it basically confines itself to a single point – that those on the manufacturing floor of capitalism have to be deprived of any sensory acquaintance with their products to maintain an illusion that the things we use come out of the factory pure and clean. Eventually and inevitably, this has a brutalizing effect on the protagonist. By the end, our aging poet becomes a descendant of all those kind men squashed by modernity – from Woyzeck through Josef K to Willy Loman.