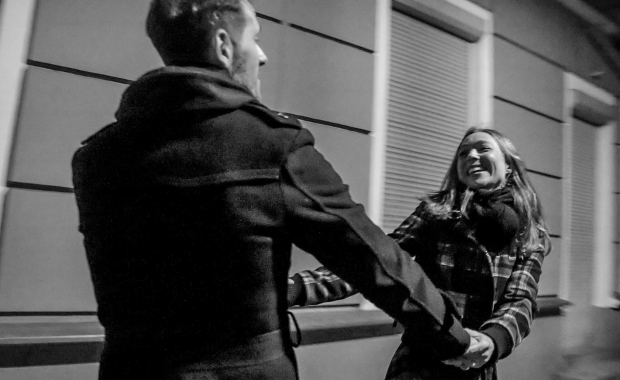 The European Film Market is over, and four days, many meetings, and a heavy fever later, Charlotte Roustang has had some success. “I was like a machine, but a relaxed one,” she says, while gamely containing her illness over a coffee.

Having shopped her picaresque expat movie My Lonely Christmas in Berlin around the “world sales” agents and other movie companies at the market, the French and Germans made many positive noises. Charlotte tells it like this: “One of them wanted to see the trailer: ‘Wow, it’s beautiful’,” she said. I didn’t imagine I could interest some of these companies.” There were also impromptu meetings with people in embassy receptions, many of whom wanted to see a rough cut. The next step, then, is to make one of those.

As for TV, Roustang learned from a German that French TV companies are more likely to be open to the mixed fiction/documentary format of her film.

But there are potholes to avoid in this business: sell your film to the type of distributor, agent or producer Charlotte calls “catalogue companies” and your movie can sink into the archive and lost in stasis. Then again, the more loyal companies only have the capacity for so many projects a year, which means you have to be lucky. “You have to meet people at the right moment,” Charlotte says.

(It’s always an instructive conversation – the difference between world sales and distribution, for example, is that a distributor distributes the film in the country of the film’s production, whereas world sales agents sell the film in other territories.)

Charlotte has also been hawking her other, more ambitious, film idea – The Training – a terrorist drama set in a dystopian future Europe, but she can’t tell me much about that, because ideas leak too easily in this trade. Sometimes deliberately, sometimes not. There’s one thing you have to be particularly wary of: telling producers your film idea when they’re drunk, because they invariably wake up the next day and think it’s their idea.

If you’ve ever fancied being a movie producer, here’s the crowdfunding campaign for Lonely Christmas.