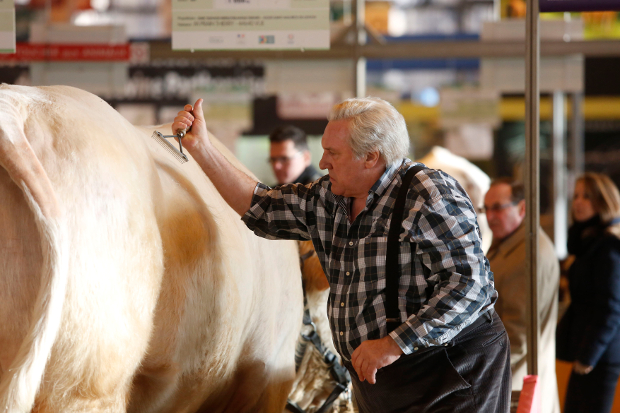 Gérard Depardieu and Robert de Niro have a lot in common. Almost the same age, both once feted as the best actors ever, and both at the heart of cinema’s golden age, when between them they worked through pretty much all of the great directors (they even starred together for Bernardo Bertolucci). And now they’re both having a contrarian, bonkers career-winter. But while de Niro contents himself with searching out the most obnoxious possible script to learn, Depardieu has gone full-Dylan to confound his fans. Dirty Grandpa? Bullshit. How about weeing in a bottle on a plane, becoming a Russian citizen, going on a farming holiday with Europe’s last dictator, being banned from Ukraine, all after having a liver transplant and four bypasses? At his Berlin press conference on Friday, the enormous Frenchman said, “It’s true that I have a lot of admiration for Putin and what he does and for the Russian population. Some French intellectuals don’t like that sometimes.”

But whatever you can accuse Depardieu of, it’s not making boring artistic choices. He arrived at the Berlinale starring in two totally different, totally idiosyncratic movies.

One is the very silly Saint Amour – the closing out-of-competition film in this year’s competition section, about three men on a sex-driven tour of France. Depardieu plays a farmer who has come to an agricultural fair in Paris with his middle-aged son, whose encounters with women are no more than a tragic string of rejections. After the son adds two more knock-backs to his list in his usual alcoholic stupor, Depardieu the farmer decides to take him out on a regional wine tour, in a taxi driven by a young man who appears to be depressingly sexually successful.

It’s a picaresque comic adventure sometimes hilarious (especially a cameo by the author Michel Houellebecq) and at other times a bit too stupid. The directors Benoît Delépine and Gustave Kervern – who showcased Depardieu’s lovely paunch in 2010’s Berlinale entry Mammuth – will never settle for a stupid joke when there’s an even stupider one to put after it. The have the same attitude to sentiment and whimsy, which the film winds down into by the end: not satisfied with a simple moment of father-son love, Delépine and Kervern lay on a bizarre bucolic happy ending that may or may not be hallucinatory.

Depardieu’s other outing this year is called The End (Forum section). Why a French film should go for an English title is just one of the mysteries you could discuss after watching this spare, enigmatic movie, in which Depardieu plays a hunter who loses his dog in a forest and then gets lost himself. On the way he encounters a menacing youth and then a naked, silent woman with dark hair and a creepy stare, both of whom may or not be part of an increasingly disturbing hallucination.

Every moment in the adventure appears to have a meaning for the protagonist’s life, but what? Who are these people? It becomes pretty obvious at some point that the movie will end with all these questions still open, and much of the enjoyment of the film – if existentialist allegory is what you call enjoyment – will depend on how much you like puzzling it all out. Through it all, Depardieu grounds everything with his steady, anxious, heavy presence – and when he doesn’t, his astonishing stomach does, which almost deserves a contract of its own. Acting from the gut, you could say. Anyway, it’s probably better than Dirty Grandpa.