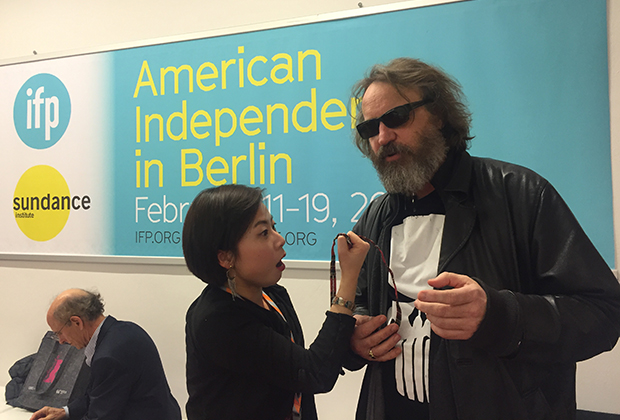 The European Film Market, which runs alongside the Berlinale, is where directors and producers go to try and find sales agents. This year, one of them is Jürgen R. Weber, and he believes in punishment.

There is a big hairy German wandering around the Martin Gropius Bau in a long black coat, a Punisher t-shirt and shades. “I believe everyone in the film business should be punished,” he says, and lifts his shades to his forehead and does a penetrating stare as if he is about to start by punishing me, then the several hundred people sipping cappuccinos in the atrium, before working his way up the stairs to punish all the stressed looking film producers clutching their grey Berlinale bags and their orange accreditation tags. Then, at his leisure, he will commence his punishment of the stands of all the sales agents and distributors on the top floor. He is, inevitably, called Jürgen, and he is accompanied by Tau Tau, a Chinese woman who is also a co-producer and a novelist, which also enhances the Jürgenness of Jürgen.

As far as I can tell, Open Wound – which Jürgen calls an “Über movie” – involves a man and a woman torturing each other in a cellar for an hour an a half, occasionally saying things like, “… a naked pussy? Come on. It’s scary. It’s like an open wound. Why do you think science fiction movie-aliens have these vaginal mouth-structures? Because they are scary!” It’s a power struggle with shifting identities.

Enthusiasm lights up Jürgen as he practices his pitch on me: “The woman employs Chinese finger torture, but with a German Zollstock.” Then, right there in front of hundreds of people, he shows me the trailer on his laptop, and narrates it in case I miss a line in the crowd noise. “Here she says, ‘I look like Chewbacca’s hairy ass down there,'” he says helpfully. When a man has his face pushed into some piano wires I look round nervously.

“How are you going to sell this film?” I ask. He has a bit of a think. “Well, for the arthouse people you have to emphasize the intellectual side of the film, and for the more commercial distributors you have to say it’s like a b-movie Tarantino type film.”

A friendly woman – who turns out to be the programme director of a children’s film festival on a tropical island off the coast of Brazil – is sitting near us. Jürgen decides to show her the teaser. She gets through it gamely, and says, “I have to go to a meeting now.”

I have a feeling Jürgen will not be deterred by this.