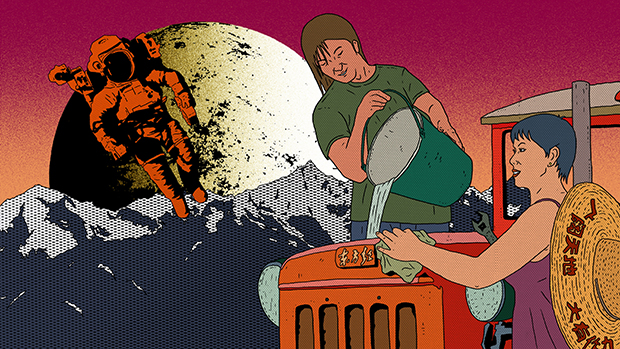 For the final day of the Competition line-up, it seems Dieter Kosslick and his merry band have decided to treat the press corps to a welcome respite from ponderous dramas, some of which have started to make this reviewer crave the sweet release of death. Stand up, Colo and Helle Nächte… and as for the pretentious schmaltz of Return to Montauk, I have forgiven, but I cannot forget.

Today’s Competition selection offers the first Chinese animated film to compete at the festival, the appropriately named Hao Ji Le (Have a Nice Day). Set in Southern China and against the backdrop of urban decay and grey-tinged construction sites, this black comedy opens with a double-cross, as Xiao Zhang steals a bag of money belonging to his gangster uncle. This sets in a motion a series of events that happen over the course of a single day, in which several characters’ fates collide – sometimes quite literally – in search for the money on an absurd (and bloody) carousel. There’s the aforementioned Uncle Liu, who knows Fauvism when he sees it, an ageing hitman with a penchant for Rocky Balboa and sombre headwear, as well as an amateur techie called Yellow Eyes who has invented a pair of “invincible X Ray glasses”.

Writer, animator, director AND producer Liu Jian‘s sophomore effort picks up stylistically where his debut Piercing I left off and has delivered the tight, playful burst of boldness the Competition so badly needed. (The title literally translates as ‘fantastic’ – talk about nominative determinism!) Jian excels in telling this surreal, deliberately paced gangster story about betrayal and the hold that capitalism has on these strange and marginalised folk. There are shades of Lock, Stock And Two Smoking Barrels, No Country For Old Men (right down to a certain execution method), and even some Tarantino-like flourishes in his screenplay, and the filmmaker injects the requisite amount of political and social satire to woo the Berlinale jury. Crucially though, the satirical elements never bog down the bizarrely intoxicating hand-drawn visuals, nor the terrific sound design, courtesy of La Danfeng and Gao Rui Feng. Granted, name-checking Brexit and the inclusion of Trump’s victory speech overheard on a radio could be considered a bit too obvious, but it works with the overall brazen zeal that permeates the film. The digs galvanize the absurdity of certain situations, whether it’s existential quandaries about who is more powerful, God or Buddha, or a fever dream that dips into psychedelia in order to better send-up “Youth to the countryside” propaganda.

It would be a sizeable blunder if Elle-raiser Paul Verhoeven and his lot don’t recognize Have A Nice Day in one of the prize categories (Artistic Contribution or Alfred Bauer Prize maybe?), and once again, I pity those who left before the end of the closing credits. That cheeky post-credit beat could suggest a sequel (if we’re lucky) and is a lovely finishing touch to this distinctive offering.

Dieter’s second treat of the day (you’re spoiling us, Mr. Director) is little-known indie Logan, which sees Hugh Jackman reteam with James Mangold, who directed Ol’ Canucklehead‘s second solo outing in 2013. Loosely based on Mark Millar’s comic book Old Man Logan and billed as the last time the actor will don the mutton chops, the film had a lot riding on it. The trailer promised a Western-infused romp and it didn’t lie: Mangold has delivered the blood-soaked, R-rated goods. The first line of (expletive) dialogue prepares you for the journey ahead: an unashamed Western with resonances, both visual and thematic, to Clint Eastwood’s Unforgiven, the Hughes brothers’ The Book Of Eli, and even George Stevens’ directly referenced Shane. It’s a confident romp that more than earns its rating; the levels of Sam Peckinpah levels of bloodshed are impressive, especially when the pint-sized Laura (impressive newcomer Dafne Keen) is involved.

A bit of spoiler-free background… Set in 2029, an aging and frequently inebriated Logan is taking care of the ailing and rambling Professor X (Patrick Stewart, adding some potent gravitas to the proceedings) and ends up babysitting young mutant Laura, whose character will be responsible for countless think-tank articles about child violence, considering she makes Kick-Ass’ Hit Girl look like Hermione Granger by comparison. Usually a loner, our cranky hero will have to put up with this newfound family dynamic and keep them safe from harm, i.e. the evil clutches of the tragically underused Richard E. Grant, who barely gets any screen time to flex his character’s muscles.

While it drags in the second act and you get the impression that it’s trying too hard to equal Deadpool with the self-referential beats and f-bombs (especially from Professor X, who shouldn’t be dirtying his mouth with such foul language), Logan ends up as a suitably gnarly and uncompromising romp that never descends to X-Men Origins: Wolverine levels of mediocrity. It boldly gives you what it promised and is to be applauded for trying something different. Sure, that daft mid-section twist leads to a confrontation even anyone can see coming, but Logan doesn’t feel like anything we’ve seen before in the X-Men franchise: it’s an oddly moving requiem that sees Fox Studios take a risk after the life-threateningly bland X-Men: Apocalypse and distance themselves from the worn-out superhero formula. Considering this is Jackman’s last stand after 17 years of playing the character, he’s going off on a high.

So, thank you Dieter for this final day of Competition and Out of Competition films; it proved to be a viable antidote to some of the bleak and weighty offerings on show and ended this 67th edition with a bold and bloody bang.