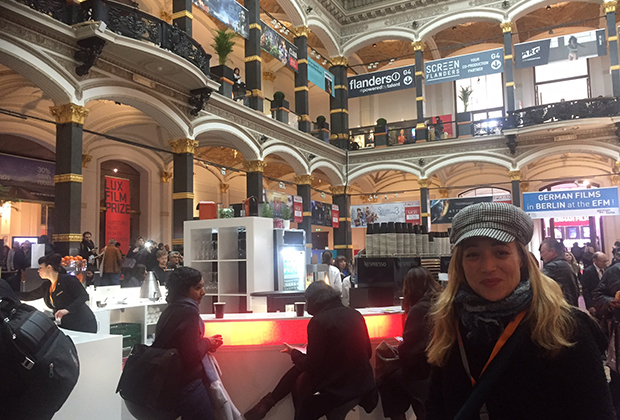 Every year, the European Film Market, one of Europe’s biggest movie trade fairs, evicts all the art from the Martin-Gropius-Bau, annexes the place, and turns it into a frenetic world of distracted people realizing how impossible it is to ever make a film and get other people to see it. Throw a brick into one of the white plywood “pop-up offices” erected round the perimeter of the Prussian atrium and you’ll do more than relieve someone of a dream that’s about to be wrecked anyway.

But it doesn’t feel like anyone here is very despondent about this. Especially not Charlotte Roustang, a relentless French Berliner who, one day 15 years ago, gave up a lucrative internet and strategy consultancy income in Paris to thrash around Berlin with the rest of us expat hacks. Several years of on-set jobs, casting director gigs, stage acting, and short films later, she’s made her first feature-length movie. She found out that “living your dreams” and “borrowing money on credit” are close companions.

Now Charlotte is here to find a rich person/state film fund/distributor/anyone to help her finish her movie My Lonely Christmas in Berlin, which, if the nine-minute trailer is anything to go by, depicts the kind of sleepless picaresque night that many new Berlin exiles go through, especially the ones who don’t go home for Christmas. (“Lonely Christmas” is, basically, the more plausible Victoria or Oh Boy).

An afternoon with Charlotte is a bit exhausting. The train of her conversation is a series of wormholes that fork in new directions as thoughts strike her brain like a meteor shower on a moon. Often the first half of a sentence distracts her before she can get to the second half, and the mental comma in between turns into an elbow that steers into a new story. She’ll suddenly act out how she fell “in love at first sight” with a German who sacked her seven years earlier, after an altercation over a car (“Well, I’m the director and I’m in charge here,” “Well it’s my car”), and then non-sequitur it with a story about the tech start-up she nearly sold. Berlin, she says, is a city of fair-weather friends, where you know everyone, but no one wants to spend Christmas with you. “What is this disc in your back?” “Oh yeah, a disc.” “Okay, a disc. Well here, if your disc slips and you reach your phone, here your friend will give you the number of a doctor.”

“Lonely Christmas” involved a fairly insane 90 days of shooting – over the last two winters, including scenes at Christmas markets and homeless and refugee shelters. “I kept having new ideas,” she says. Yeah, I can imagine.

Ironically, all this creative energy seems to have created her problem at the EFM, which is that no investor will put money into a film that has already been shot – money people want to be there at the beginning, when they can make decisions. With a film in financial limbo between shooting and production, her only hope is some kind of post-production magnate. She might have to keep the pitches short too.

If you’ve ever fancied being a movie producer, here’s the crowdfunding campaign for Lonely Christmas.