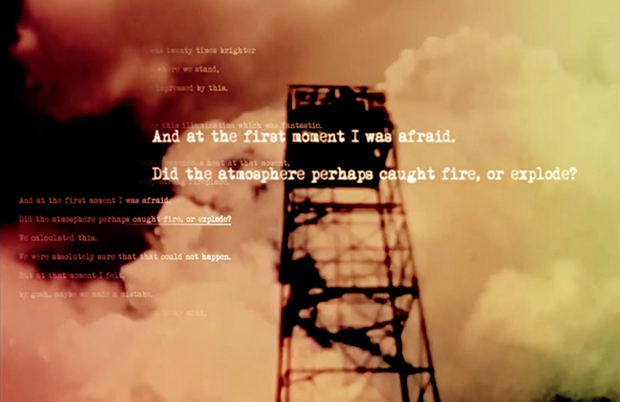 There’s a bit in Rosencrantz And Guildenstern Are Dead when one of them worries because he can’t remember the moment when he first realized he was going to die. You’d think it must have been a shattering point in any child’s life, when you realized you aren’t going to go on forever. Instead it’s a trauma so devastating that you forgot it.

Something similar has happened to humanity with nuclear weapons in the last 20 years. We’ve forgotten that moment sometime after 1945 when we realized that one human being could just make the decision to clear life from the planet within half an hour. Now we just go through our days with this knowledge. All of us post-war kids were born with a gun to our heads, and inevitably we forgot it was even there. Not only that, children these days no longer have “Duck and Cover” cartoon tortoises to teach them to run and crouch by a wall whenever a nuclear bomb goes off nearby.

The Bomb‘s main purpose is put that fear back in you. This movie montage of nuclear footage – presented with a live gut-shuddering soundtrack by The Acid, who are gradually lit by a glowing orange light-thing that looks like a core in meltdown – is very effective about it. The film-makers – investigative journalist Eric Schlosser, film-maker Smitri Keshari, and video artist Kevin Ford share an equal credit – apparently watched hundreds of what must have been pretty terrifying hours of footage, and they’ve come up with an hour long movie with it’s own emotional arc: sort of brooding to harrowing, occasionally lightened up a bit with Strangelove-ish absurdity.

There are marching armies, a lot of mushroom clouds, nuclear tests involving whole farmyards of live animals: pigs, dogs, sheep wrapped in baking foil, and monkeys, all being stuffed into metal cages, panicking and shrieking and then being incinerated. There’s the aftermath of Hiroshima, Oppenheimer quoting Hindu scripture alongside quotes from Drumpf and Obama and Reagan (who became a nuclear disarmament advocate). Somewhere in the middle of this there’s the most worrying montage – of the thousands of times that nuclear weapons went wrong – rockets firing off askew, men drilling holes where they weren’t supposed to, nuclear missiles getting lost. It’s an accumulation of madness that would make you paranoid, if you ever bothered to think about it.