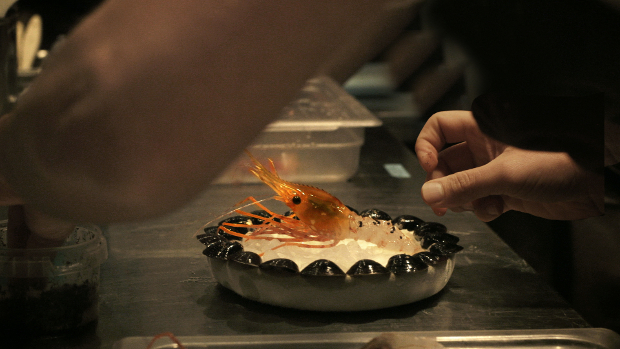 René Redzepi is probably the best chef in the world. I know this not only because his famous restaurant in Copenhagen, Noma, won the best restaurant in the world prize four times in the last six years, but also because in the denouement of the new documentary about him Ants On A Shrimp (Culinary Kino section) he puts some tiny bits of ant on a shrimp (which has been stripped of its shell but is still alive) and serves it to some people who then eat the little fucker.

It’s a fascinating moment in a not always fascinating documentary about Redzepi’s venture in Tokyo, which may subvert your formed opinions about star chefs. Not once, for example, does he slap two pieces of bread around the head of a hapless line cook and scream “WHAT ARE YOU?” repeatedly until they break down and whimper “An idiot sandwich.” This may or may not disappoint you, but director Maurice Dekkers meant it that way. “I told him I did not want to make a film where he was shouting all the time,” the affable Dutchman said afterwards. “That’s a cliché. I wanted to show the moment of creation.”

Redzepi never gets angry with his team, just disappointed. This is because he infuses (not literally) his family of cooks with the confidence to create new dishes from the local Japanese cuisine. And, since he’s not a moron, that doesn’t mean he decides to have a go at sushi – it means he spends several weeks tramping around Japanese forests in the rain picking up mushrooms, twigs and ants and putting them in his mouth. At one point he eats a tiny wild kiwi and has a mouth-orgasm over it (this later forms the basis of a soup, though only after brain-melting hours of trial and error). Sometimes Redzepi goes full wanky, and says things like, “This herb smells like an insisting person,” or “Can we crack the code of the turtle?” (They can’t, but they can slice to death quite a few of them trying, which is one of the more harrowing scenes). There’s another good bit where one of his cooks comes up with a dish that involves deep-fried fish sperm and he calls it “an amazing version of fish and chips.” Even though I’ve never had deep-fried fish sperm, I’m pretty sure he’s wrong.

Basically, it’s a solid film whose lack of drama is deliberate – Dekkers underlined that he wanted to show that top chefs are just normal people, usually with working class backgrounds (at home after a 12-hour shift, we see one of them desultory and exhausted, chewing on a takeaway pizza). But it might just be a tiny bit disappointing if you’re really into shouty TV chefs turning their cooks into idiot sandwiches.