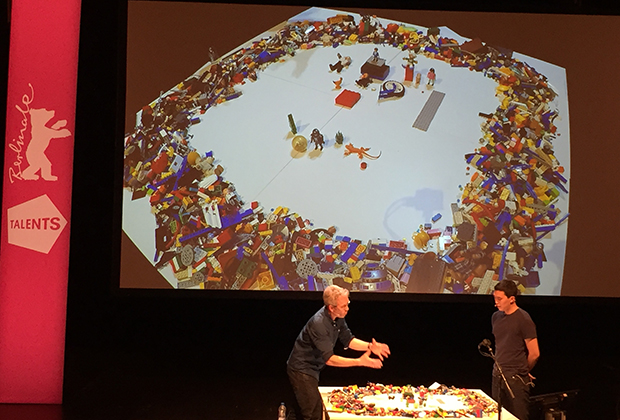 Paul Tyler is pretty sure he could have saved the end of Homeland with his big Lego table. At the end of one season of the American show, that ginger soldier or whatever apparently decides not to kill some president, but then placates his terrorist boss in Pakistan by saying that instead of killing the president he’s going to join the government in a menial role and help introduce economic reforms. I can’t be bothered to check whether this is accurate, but Paul said it, and as Paul pointed out, it is definitely bollocks.

Then this bouncy, wiry, friendly Englishman got excited, picked up a small orange plastic figure and put him next to a black Playmobil knight (the Pakistani terrorist boss), and then found a clump of indeterminately-attached Lego bricks to represent the economic reforms that ginger man has just appeased the terrorists with. Then he imagines the writers of Homeland in front of him, at his Lego table. “Hang on, you NEVER told me before that he was interested in economic reforms,” he says excitedly, then he turns back to us. “I would love to have worked on Homeland.”

Berlinale Talents is another parallel bit to the film festival that involves masterclasses, panel discussions and workshops for young film makers from around the world. It also involves a lot of training weekend jargon – it labels everyone Experts and Talents, and there are meet-and-greet events called things like “Early Bird Breakfasts”. In this workshop, called Know Your Future Audience, Paul Tyler, a producer who turns out to have a steely shard of pushiness inside him that seems to have been forged in hundreds of corporate training days – offered up his well-honed Playmobil development method.

It’s simple, and thanks to the pushiness, effective – it mainly involves hammering out inconsistencies that the writers and directors may have overlooked. To begin this session, he got a young Korean-American to present his script for a movie called Folding City, in which he imagines a future world where, because space has become the ultimate resource, cities have to be folded underground for various periods of the day – the class system dictates how long you get to see sunlight.

So Paul formed a wide ring of Playmobil and Lego and other plastic toys on a square table and invited Josh to map out his story with the toys – not just the characters and the events, but also their motivations, relationships, and the various physical spaces in their universe. And then, he made him pick a suitable toy to represent his audience, and also inserted him into the space. It’s such an obvious idea, but it’s ingenious because it depersonalizes the story, so when the story gets attacked no one feels depressed, and because it gives visual shortcuts to every element to the story. But what makes it all work is Paul’s hyperactive questioning, who never allows the writer or director to “polish the shiny bit” (i.e. the bit they know works) – he’s not so much a troubleshooter as a troublefinder, even if the story seems to be really clear.