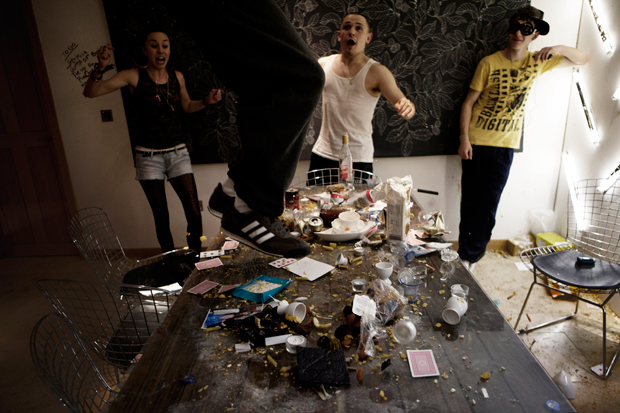 This blog was written on Friday, the evening of February 10.

So there I am, in CinemaxX 7, tapping away officiously on my Mac. One more film to go today: Kirsten Sheridan’s Dollhouse, from Ireland (Panorama). If that name rings a bell, it’s because she’s been here before (with Disco Pigs in 2001). You might also know her dad: Jim Sheridan, director of My Left Foot, In the Name of the Father). The woman sitting next to me clearly thinks I’m in a position of authority. She asks whether to stay for this or use her ticket for the Competition film A Moi Seule, also just about to start elsewhere. “Oh,” says I. “A Moi Seule is brilliant.” (It is.) “Try 10 minutes of this and then check out the other one”.

Then the film begins to roll and I lean forward to stretch my back (“Berlinale back”, as it’s called, marked by a curvature of the spine that fits perfectly into a cinema seat). Twenty minutes later, the first scene is over and I remember to lean back (and breathe). What the F**K!

This is a workshop production. If that sounds daunting to you, imagine what the bunch of young actors thought, when Kirsten Sheridan stuck them in a house for a week and instructed them to work out their respective characters. Then brought them on set, with no script, and directed them from episode to filmic episode, throwing in a surprise development about every 10 minutes, just to keep things interesting.

The title gives us a little push in the direction of Ibsen’s great drama, A Doll’s House, and I was expecting some contemporaneous naturalism but nothing like this group of disaffected, variously violent, drug snorting wrecking crew of youngsters who storm into an empty house to party their way through the well-stocked fridge and booze cabinet, ricocheting off the walls like hailstones on a car roof, smearing themselves over each other and every other available surface.

It doesn’t always work. One moment towards the end, which elicited some nervous giggling from the audience – followed by a protracted holding of breath as the denouement unfurls. But that’s a minor quibble. Sheridan’s plan has paid off.  The drug and alcohol induced group dynamics are volatile, to say the least, especially with the entrance of an outsider (a popular naturalist device: the introduction of a stranger to shake things up). Combined with some in your face intimate camerawork, several changes of pace, visceral performances from all the young actors involved and a powerful choice of music, it looks as though Sheridan is all set to follow in her father’s footsteps.