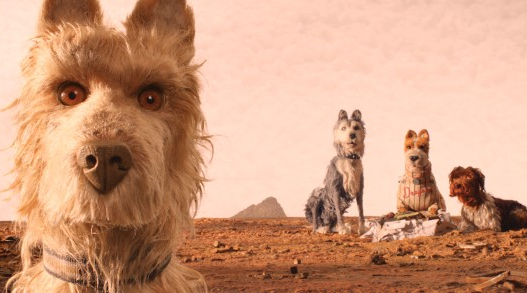 Writer-director Wes Anderson has not always been kind to man’s best friend. His filmography is positively littered with canine casualties. Off the top of my head, both beagles in The Royal Tenenbaums and Fantastic Mr. Fox were respectively struck by a car and poisoned by some laced blueberries, while the Fox Terrier in Moonrise Kingdom was struck by a stray arrow. And while we are told that a certain Butterscotch dies offscreen in a glass compactor in Isle of Dogs, his first feature since 2014’s The Grand Budapest Hotel and the first time the director has returned to the medium of stop-motion animation since 2009’s excellent Roald Dahl adaptation, the director makes amends towards the canine community by putting them front stage.

Set in Japan 20 years in the future, the corrupt and feline-loving Mayor Kobayashi issues an executive decree stating that all canine pets of Megasaki City must be exiled to a vast garbage dump island, under the pretence that “canine flu” and “snout fever” threaten the human population. His 12-year-old ward, Atari Kobayashi, embarks on a quest to find his missing pup, Spots, and on the island, he teams up with a pack of dogs who will aid him on his caper.

The first thing to say is how laugh-out-loud funny Anderson’s screenplay is, and how much the screen positively fizzles with inventively assembled touches. It’s exactly what you’d expect from the filmmaker, whose visual quirks and deadpan sense of humour are here in spades. His lush and textured details are often overwhelming, meaning that your eyes frequently dart around the busy screen, where every corner yields an immaculately crafted and lovingly rendered detail, from a piece of subtitling to some split-screen antics.  It’s impressive, if at times a tad exhausting. As mentioned in the press conference for the film, there are also a few timely parallels to be found in certain lines of dialogue (“You belong somewhere – you’ve got papers,” says one stray to a groomed show dog), with Anderson confirming that “as the world was changing while we were making this film, it began to feel right for the moment.” The gentle social commentary on fearmongering is ultimately something of an afterthought, leaving a story about a boy and his dog that features an epic voice cast composed of regular favourites (Bill Murray, Edward Norton, Jeff Goldblum, Bob Balaban…), joined by Anderson newbies Bryan Cranston and Scarlett Johansson. The stand out is a brief vocal cameo from Tilda Swinton, who plays a tiny pug called The Oracle who can “tell the future” because she can understand what the humans are saying on television. Special mention must also go to cinematographer Tristan Oliver, the DP behind Fantastic Mr. Fox and Loving Vincent; through his stop-motion expertise (and a terrific score by Alexandre Desplat), Anderson manages to lovingly pay homage to the works of Japanese director Akira Kurosawa, as well as the great animator Hayao Miyazaki, whose use of detail and silence is clearly a reference point.

While it is funnier, Isle of Dogs is not quite as strong as Anderson’s previous foray into stop-motion, letting itself down in the third act. It tends to dedicate too much screen time to certain peripheral characters – namely a foreign exchange student voiced by Greta Gerwig – who feel somewhat surplus to requirement, and the end result left me hungry for more. Still, it’s a hugely enjoyable romp that marks the first time that the Berlinale has opened with an animated film in its 68-year history, and is an inspired choice to open the festival, especially compared to last year’s irredeemably pedestrian Django Reinhardt biopic. It will doubtless prove to be a mastiff success *cough* with the director’s many devotees, aficionados of stop-motion, and fans of a good shaggy dog story.