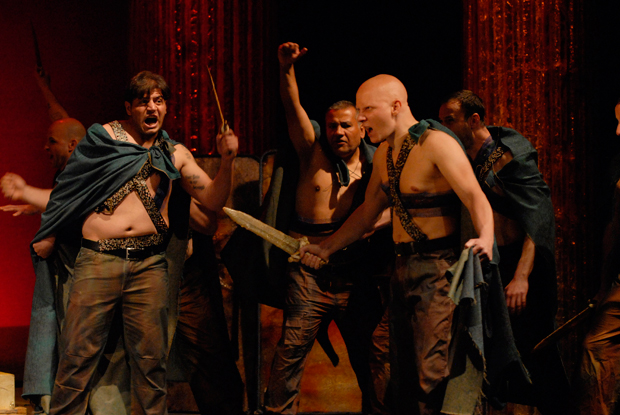 What a glorious start to the Berlinale’s third day! Finally, the Competition presented a masterpiece: Paolo and Vittorio Taviani’s Cesare deve morire (Caesar Must Die). With a career that started in the 1950s, it’s proof of their enduring virtuosity that the Taviani brothers are able to craft such a modern piece of filmmaking.

The film depicts the production of Shakespeare’s Julius Caesar by inmates of the high security wing of Rome’s Rebibbia prison. Set in the prison and with the convicts playing themselves, Cesare deve morire is an innovative hybrid between documentary and fiction that seamlessly incorporates their rehearsals, and thus the Bard’s play, into their prison lives.

And don’t worry, this isn’t one of those ponderous films that expect you to be a Shakespeare buff – my education limits itself to a handful of plays read in high school, not including Julius Caesar. Rather, it’s one of those rare adaptations that manage to make it clear just why Shakespeare is timeless and universal.

The opening and close, which portray the finale of the play’s performance, are shot in colour, whereas the time leading up to it, the auditions and rehearsals, are depicted in gorgeous black and white. Though it’s an obvious visual device for representing the enrichment of their lives through the experience, it nevertheless works beautifully, the high contrast monochrome evoking an intense poignancy in portraying these bleak settings.

It’s inspiring to see the extent to which these men – most of them Mafiosi – fall in love with their roles, which bring perspective to their past all the while imbuing their wretched present with new meaning. Many of the prisoners that have taken part in Rebibbia’s now renowned theatrical productions have gone on to pursue successful acting careers after their release and this film is a stirring testament to the transcendental power of art.