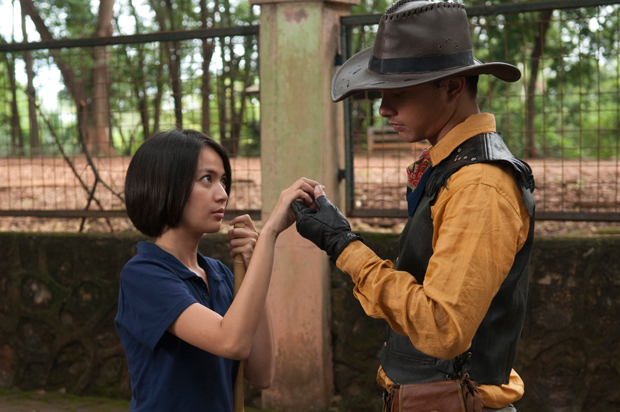 An adorable little girl wanders through a zoo alone, calling out for her dad. She soon stops looking for him and simply putters around silently, seemingly for days, enthralled by the various animals. This endearing sequence opens the Competition entry Kebun Binatang (Postcards From the Zoo) by Indonesian writer/director Edwin, a curious film that revels in its quirkiness, but never quite manages to be as enchanting as it hopes to be.

In the following scene, the girl has grown up into a woman in her early 20s called Lana (Ladya Cheryl).  She works at the zoo and it’s implied that she never left its premises. Lana is deeply devoted to the animals and in her serene and ingenuous demeanour exhibits a closer kinship to them than she does to humans.

One day she meets a magician dressed as a cowboy (Nicholas Saputra); fascinated by him, she leaves the park and becomes his assistant. One moment they’re working at a market, the next they’re providing entertainment at a club owned by a gangster. The magician disappears and, after a stint working as a masseuse/prostitute for the gangster, Lana eventually returns to the zoo.

The plot is as elliptical as the above synopsis, jumping from one situation to the next without any explanation or transition, and there is virtually no character development, with Lana taking on her various roles with the same amiable passivity. Rather, the film wholly relies on its offbeat premise and bizarre situations to generate droll humour, which for the most part misses its mark.

Kebun Binatang also seems to be aiming for a social message by intermittently providing title cards that offer definitions of various terms from conservation biology, such as ex-situ, reintroduction, and translocation. These comment on the plot, stressing the analogy between the protagonist and the captive animals – for example, reintroduction (of a species from captivity to the wild), is flashed when Lana leaves the zoo with the magician. This analogy is neither particularly subtle as to require explanation, nor particularly original, having already been used by Peter Greenaway to more interesting results in A Zed & Two Noughts.

There are some inspired moments, as when Lana plays with the remarkably camera-savvy animals or when her zoo colleague mixes catchy dance music out of recorded animal sounds. However, these are too few and far between to salvage the film, which becomes increasingly tedious and ultimately reveals itself to be rather hollow.