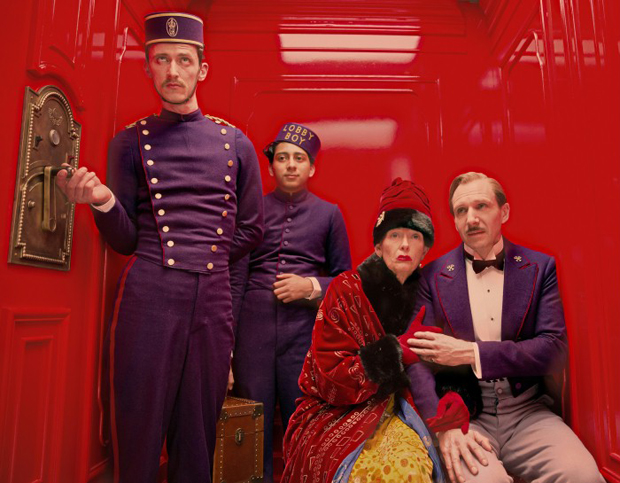 We’re up then. As first one, then two, then three cinemas opened their doors to accommodate the press for screenings of the opening film, expectations were high. Whether or not they were fulfilled depended, in part, on attitudes to the talented foibles of its director.

A master of story-telling, Wes Anderson’s elaborate framing techniques have reached a new apex in his latest film. Not only narratively, with a story that recedes from 1985 to 1968 as an aging author (Tom Wilkinson) reflects on his younger self (Jude Law) and the acquisition of a particularly special tale, but beyond that to the year 1932, when the tale itself takes places. It’s the story of Gustave H (Fiennes), legendary concierge at the Grand Budapest Hotel, and his lobby boy, young refugee Zero Moustafa (Tony Revolori). Their story is cinematographically framed with the implied (digitally recreated) use of the aspect ratio, also known as Academy ratio of 1.37:1, which designates the width-height relationship of a filmed image. Appropriately enough, this ratio was standardized in 1932: its use here gives the film that decidedly 20th century feeling befitting its subject matter. Beyond that, we have Anderson’s predilection for architecturally framed, full-frontal, fully symmetrical shots of windows, porticos, courtyards and doors out of which his characters pop like rabbits from a hat. Along with a conspicuous five-act structure? Now that is framing.

Stylistic braggadocio (and you can’t ignore this stuff) can overwhelm material or merge with it. There are a couple of close calls here (we’ve voiceovers and decidedly wilful colour schemes to contend with as well) but with a beautifully paced and delivered script, played to affectionate, campishly declaimed hilt by Fiennes and with disarming candour by young Revolori, successes outweigh failures as the screenplay hits its stride in leaps and bounds: Gustave’s grave-snatching affair with the elderly Countess D (Swinton), his hasty appropriation of a bequeathed painting (“Boy with Apple”: hello, forbidden fruit), pursuit by her black-shirted son plus henchman (Brody and Dafoe), imprisonment and escape (variously aided by characters played by Goldblum, Keitel, Murray and Balaban in literally “supporting” roles).

Set in a land where the place names range from the Teutonic to the Teutonic (Augensberg, Zilchsbruck, Nebelsbad, Gabelmeister) and the police (under Edward Norton’s benign but ineffectual sergeant) fail to hunt down violent black-shirted Zig Zag (ZZ) thugs, Anderson’s film is a statement that defies dictatorship: political dictatorship but also that of taste, convention and conventional notions of credibility. In return, Andersonian themes of unlikely solidarities, young love, dysfunctional families, the choice of new companions and above all, the use of old stories to create new narratives come together in a winsome mosaic of ironically filtered humanity. A tall order, but he’s pulled it.