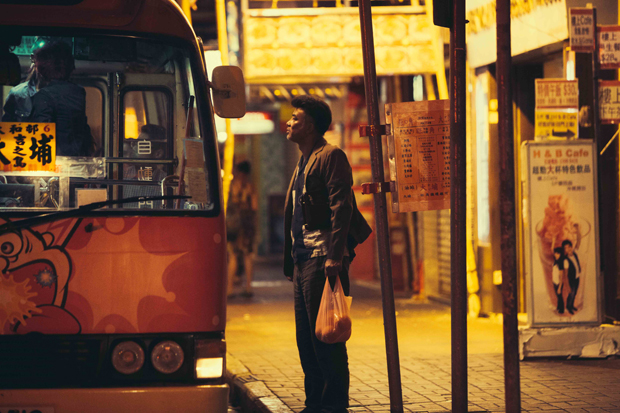 I’ll admit to some relief that a clerical error slipped a film such as Fruit Chan’s The Midnight After into a Berlinale which has tiringly and relentlessly booked any film that smacks of political and gender hectoring regardless of quality of content, with every second offering about a Eritrean transvestite who has to play out family dynamics during a Third World conflict (the protagonists are either dying in close-up at the end or sitting down to an ethnic dinner fetishistically photographed). But Midnight is one of those video-slick Hong Kong productions that will do anything to win over its audience even if its subject is ostensibly the end of the world.

As if Lost were scrambled with Stagecoach (wait, isn’t that Gilligan’s Island?) and sprinkled with Scream, subtlety is not Midnight’s strong suit, as befits a film bearing the credit “Based on a Novel by PIZZA” and featuring in its ensemble cast of broadly drawn types a Cantonese Joey Ramone manqué named Jan Curious, whose karaoke version of Bowie’s “Space Oddity”, sung into a toilet brush, is both the high point of the film and a red herring Fruit never allows us to digest. A film in which everyone announces who they are and what they represent (or they are making pronouncements for our benefit about who the other characters are), the plot is relatively simple: the types board a mini-bus. The bus passes through a tunnel. Weird shit happens. Everyone checks their phones. More weird shit happens that doesn’t seem to have any connection to the previous weird shit.

Is it a ghost story? A horror film? An environmental parable? Everything’s played for laughs – even rape – but the tone will quickly shift into sentiment and out again, as Hong Kong films often do, or the violence will suddenly maintain meaning, as during a never-ending revenge sequence that demands an emotional investment the filmmakers had previously disregarded. The same could be said of the affecting final shot of the bus. If only, for the previous 2+ hours, the bus had actually managed to be moving.