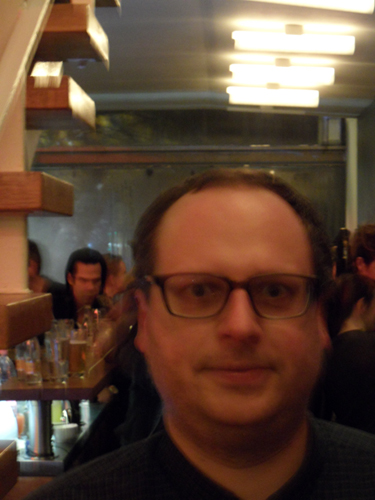 It’s not always clear what the Berlinale is all about. Why is it so important? Is it about seeing lots of great films? No, you can do that any time. You can do that at home on your own with a crate of cheap wine, burying your troubles in the magic of light and shadow. Or maybe the Berlinale is all about the sense of community in the auditorium, the shared reactions with hundreds of strangers. Or it’s about the excited queuing for tickets and the frantic desperation to see a film that turns out to be a turd that half the audience walks out of in 10 minutes. Or it’s about having no idea about what you’re going to see, about the annoying idiot who carefully drapes a scarf across four seats to reserve for friends who don’t show up and subsequently gets into a bitter altercation with the stressed volunteers. Or it’s about the awkward Q&As with the directors. Or it could be about the applause after each screening – the sense that this screening was an event of significance, that you were all here together and you shared it. The applause is a sign that that’s happening. This is, after all, the people’s festival – the one major film festival in the world that takes place in a city where actual people actually live, rather than some remote, exclusive resort in the Mediterranean, where the film industry commits its annual incest.

But for me, all things considered equally, I think the Berlinale is really more about standing quite close to famous people and trying to get a picture with them in it. I’ve gotten very good at this. You could say I’ve made the exercise my own. I’ve honed the necessary skills over years of hard festival-going and social incompetence. No longer do I brazenly amble up to great British auteurs and earnestly explain that I once learned a speech from one of their films off by heart. That doesn’t work. Gone are the days that I make a fool of myself in front of German eccentrics and subsequently draw the ire of put-upon PR specialists. That wasn’t a reasonable use of my time and resources.

Instead, I enter parties for films I haven’t seen, take some drugs, talk to film producers, making sure to leave the vague impression I have seen their film and thoroughly enjoyed it, all the while shuffling into line with Nick Cave, until I get a snap where it looks like I have a wise old rock star emerging from my shoulder. He’s part of me. Then I go home, put on a Nick Cave record, turn off the lights, and stare at the picture in the dark, and imagine Nick really is a small romantic sage who by some unknowable genetic accident is growing on my shoulder, whispering life advice into my ear in the form of lyrics. Now THAT’S the true Berlinale feeling.

If you want to know what Nick Cave’s actual film is about, you could read this. I don’t need to, for I have the man himself inside of me.