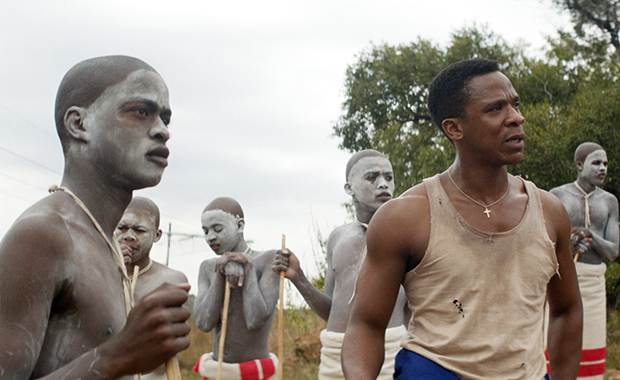 While the 67th Berlinale Competition selection kicks off with Etienne Comar’s middle-of-the-road biopic Django (“They killed my monkey!”, being one of the more memorable moments), the Panorama strand inaugurates its selection with the far superior South African film The Wound, the first of many to focus on what the programme committee have dubbed “Black Worlds”.

Set in the mountains of the Eastern Cape province, Xolani (Nakhane Touré) returns to a secluded Xhosa community of men to participate in Ukwaluka, a traditional initiation into manhood that begins with the ritual circumcision of the adolescent candidates. His role is as a caregiver, assigned to shepherd “city boy” Kwanda (Niza Jay Ncoyini), who is “too soft” in the eyes of his uncle. The mentoring duties last for several weeks and serve as an excuse for Xolani to renew his secret sexual relationship with childhood friend and family man Vija (Bongile Mantsai), a fellow caregiver. It doesn’t take long before the quietly rebellious Kwanda realises his caregiver’s secret, a revelation that if made public would certainly jeopardize Xolani’s position and safety within a community that considers homosexuality a threat to its cultural values.

Aspects of The Wound’s narrative, as well as the remote setting, owe a lot to Ang Lee’s Brokeback Mountain, and it’s hard not to think of Barry Jenkins’ recently Oscar-nominated Moonlight when director John Trengove tackles the thematic spine of his film: the exploration of black masculinity and what it means to be a man. However, the inevitable comparisons with these queer dramas shouldn’t diminish the impact of what Trengove has accomplished, especially when you consider that this is the director’s debut feature. He bravely courts controversy by tackling several taboo subject matters: the Ukwaluka ritual, while known and under scrutiny for reasons of medical safety – and even mentioned in Nelson Mandela’s autobiography – is supposed to be kept secret…and therefore not supposed to be depicted on the big screen. He wisely elects to ‘show’ the sudden razor circumcision in the film’s opening moments, thereby allowing the intelligently shot and leg-crossing element of the rite of passage to become an engaging framing device, as opposed to a narrative hindrance. Trengove and his co-writers Thando Mgqolozana and Malusi Bengu use this framework as a springboard to deliver a gay narrative that portrays the emotional consequences of repressed sexuality when faced with ingrained homophobia and traditional rhetoric regarding masculine identity.

At the center of it all is a wonderfully understated performance from Nakhane Touré, a famous and openly gay South African singer, who wows in his screen debut. While many would have fallen back on empty stares to portray entrenched loneliness, Touré subtly conveys a simmering ache and lack of confidence that assures emotional investment, even when the film dips into predictability in its final act. Also noteworthy is Paul Ozgür’s lensing. Whether it’s the nocturnal shots of campfire flames licking the faces of the teen initiates or the white body paint that collides so meaningfully with the red slashes on the traditional loincloths, the DOP beautifully navigates the metaphoric images and the secluded setting. He contributes in no small way to heightening the thematic content and the story’s emotional layers.

Measured and engaged, The Wound is a bold choice to open the Panorama programme, one which not only marks John Trengove as a name to watch but boasts a unique approach to prominent themes of masculinity and the global history of black communities within this year’s varied film selection. With this in mind, keep your peepers peeled for Raoul Peck’s I Am Not Your Negro, screening in Panorama’s Dokumente section (more on that one in the days to come), as well as Forum’s Maman Colonelle… But for now, you’d do well to bypass the bright lights and red carpet of the Competition in favour of The Wound.