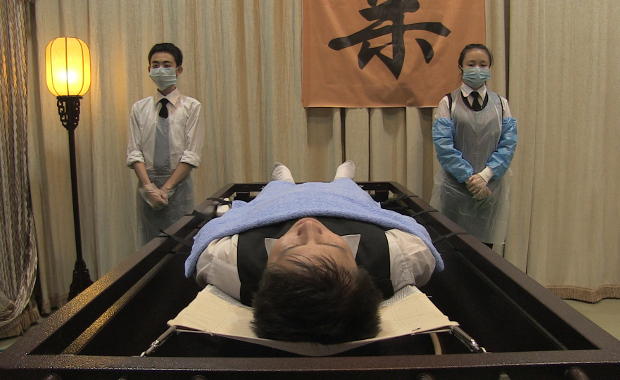 A stand-out this year in the Generation section is Carol Salter‘s documentary Almost Heaven. The British filmmaker offers an empathetic look into the life of a 17-year old girl, Ying Ling, who left her family home in order to become a mortician in one of China’s largest funeral homes. I talked to Carol Salter to discuss the film, a moving coming-of-age story that doubles as an exploration of life and loss…

How did the idea come about for Almost Heaven?

Well, both my mum and dad passed away during the making of the film, but I was caring for them at the time. I was on the tube and I read this tiny article in a newspaper about young people in China wanting to give honour and respect to the dead by becoming morticians. The idea of teenagers having to care for the dead every day struck me. How does someone deal with that every day, especially someone that young? There is a taboo about death in China and it struck me how unusual their job is, living far away from their families and being confronted with death every day. I held on to that tiny newspaper clipping for ages and I’ve still got it. It is ultimately a passion project, a film I needed to make and one which is dedicated to my parents.

How was the shoot in China? Did you encounter any difficulties or restrictions?

I went blindly to China with no financial support or production, and met these lovely young people at Ming Yang Mountain. I thought there would be more difficulties but I went on my own with a tiny camera and that made things easier. The advantage of making it off your own back means you’re doing it your way and make the film you want. I could only be in China for 4 weeks at a time, but the young morticians gave some light relief and were a joy to be around.

Was the language barrier difficult to overcome?

Well, I don’t speak any Mandarin so the key is finding a fantastic translator. Not just a translator though; someone you can trust so you don’t culturally go wrong. I filmed my way through the situations and afterwards, maybe at the end of the day or even much later, I find out what has been said: that gives me a lot of surprises, more than I imagined. That is what’s beautiful about documentaries: I don’t know what kind of journey I’m going on. When you write a script, you know what’s going to happen.

What made you choose to film Ying Ling in particular?

I knew I wanted to film someone who just started at the morgue and Ying Ling is incredible because she doesn’t acknowledge the camera. You know when someone knows they have a camera on them, they try to look good and behave differently; she never did that. While filming a documentary, you’re always searching for emotional truth and nothing is ever set up: she shows every emotion on her face and her vulnerability, quirkiness and inner strength was immediately interesting.

We see some close-up shots of the deceased and the rituals that take place in the spa ceremony. Was it hard getting authorisation from families to film the bodies?

This was very important to me, to get it right: how do you ask permission to a family when they’re going through the most awful moment in their life? Many were very grateful and there were times when the families told me they felt privileged that I was there.

It’s noticeable at one point that the funeral homes have their own camera too.

Yes, that’s part of the service they provide. They film the ceremony for people who can’t be there, like a wedding video.

From a Western perspective, it often feels like there’s a clash: we admire the beautiful traditional rituals (massaging the corpses, whispering to the dead), the superstitions about death, and at the same time, the film shows the production line of coffins and at one point even the mention of money during a service…

It’s like life: it can be both beautiful and cruel. For instance, my mum’s ashes were delivered to me and I had to sign for them, like a package. There has to be a practicality to it and because the film takes place in such a huge funeral home, everything is heightened: there has to be barcoding and paperwork.

There’s also a lot of gentle, slightly off-beat humour in the film…

Yes! If the film was just this stream of bodies and mourning families, it would not make a film. I knew it had to be a tender friendship story, one about loss and how you deal with that, but also about Ying Ling, who holds the story together. Someone even called it a “feel-good film”. I thought, goodness me!

It’s a strong choice to have it in the Generation section at the Berlinale, a selection focusing on (but not limited to) younger audience members…

I felt the Berlinale was the best platform for Almost Heaven. I’m pleased it’s in a festival that celebrates different ways of making films. However, I was surprised that it was put in the Generations section: I thought at first that it might not be suitable for a young audience, considering people might be worried about a film that takes place within a funeral home. But I think it’s great that it has a new audience with Generation, and I hope they connect to the friendship on screen and are moved by people their age dealing with the reality of death.