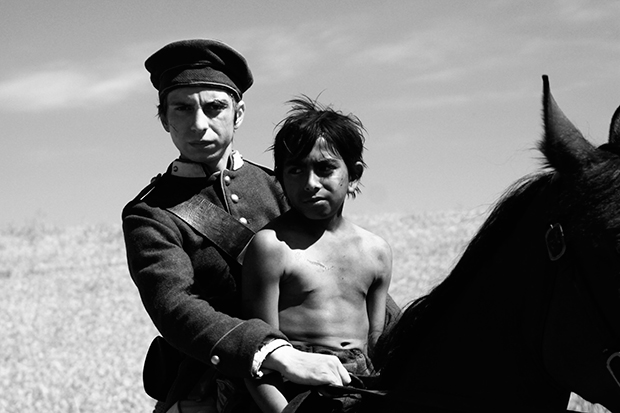 If the list published by one of Berlin’s major papers chronicling the views and the attendance stamina of notable German language critics is anything to go by, enthusiasm levels have reached an all-time low. With only two days to go, only two critics (of seven regularly cited) apparently bothered to catch the 9am press screening of the Rumanian/Bulgarian/Czech co-produced Aferim!

A choice they might come to regret. Third-time Rumanian director Radu Jude’s earlier contemporary dramas showed here in the Forum section and found many fans. Based on accounts of the way gypsies were treated in the early 19th century, Aferim! (an old Turkish word for Bravo) is a treatment developed by Jude and cowriter Lazarescu. It’s set in 1835, when Rumania-language minorities had yet to form a nation state. Governed from the distantly Ottoman Istanbul, Southern Wallachia – where Aferim! takes place – is episodically sketched by Jude as a place dominated by feudal and orthodox hierarchies, a society in which the term Roma was not yet current and gypsies were referred to as ‘crows’.

The film opens with constable Costandin and his son Ionita riding through these alternating dominions in search of Carfim, an escaped gypsy slave accused of stealing from his master, a local boyar. With definite nods to black and white neo-realist schools of alternative history (Pasolini comes to mind although the actors here are professionals) this unlikely pair make their way from community to community, scaring up the chickens and overturning baskets, pocketing bribes and roasting fish on nighttime fires. Intentionally and unintentionally comedic, they conjure up a latter day version of Don Quixote and Sancho Pancha, digressing freely on sex, morals and politics. But the rambling structure belies the acuity of the film’s historical implications and as with Cervantes, foolishness masks deeper political issues: the depth suggested by the use of deep focus on black and white 35mm film is more than just a surface hint that Aferim! indeed deserves a longer, deeper look.

Italian director Laura Bispuri presents her first feature film in Berlinale Competition with a tale of Hana/Mark, a young woman unwilling to submit to the misogyny of remote Albanian communities who pledges herself as a teenager to the life of a man and life-long virginity. Vergine giurata stars Alba Rohrwacher as the title protagonist whose mutely communicated decision to leave behind her vows and the bleak mountain environment contours the opening scenes.

Hana goes to live with her “sister”, who took a different route to escape when she was a teenager and now lives in Milan with her husband and daughter. Relying heavily on her sister and the atavistic bonds of shared youth, Hana slowly loosens the shackles of her vow (neatly symbolized by an unraveling of the bandages that kept her chest flat) and hesitantly begins to tread new, unexpected paths. Beguiling captured with a camera that goes wide to capture the freedoms of a solitary mountain life before closing in on Hana’s face and new forms of liberty, Vergine Guirata is competently told in images rather than dialogue: a simple tale that leaves much to viewer empathy and deduction. The fact that Bispuri disturbs this process in the closing scene with an overly symbolic, improvised folkloristic duet performed in a local bar could be symptomatic of the director’s youth/inexperience. Editorial sensitivity and Rohrwacher’s performance almost compensate, however, and provide more than enough fodder to justify continued critical focus on future work.