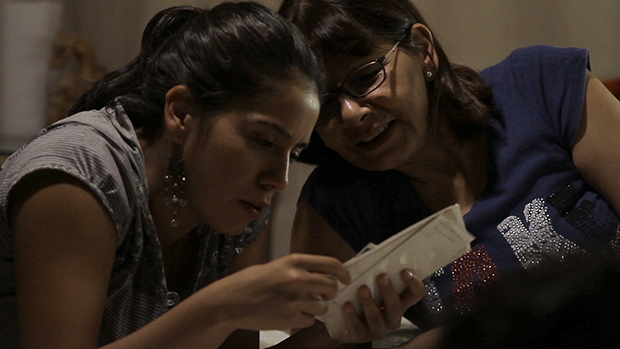 Today offered up the Competition’s only documentary, Beuys, which showcases previously unreleased and unpublished footage of the controversial German artist. Director Andres Veiel crafts a thorough portrait of “the hero of his youth” and does so by plunging you head-first into Joseph Beuys’ artwork and performance art. There’s the silent grand piano with the thermometer resting on top of a blackboard, the infamous ‘7,000 Oaks’ project, the dead rabbit he cradles and puppeteers about a cubicle, as well as some paintings that would populate the wet dreams of Marilyn Manson. The archival footage is impressive but Veiel articulates a familiar experience, one which ultimately drags and can’t maintain interest levels during its 107-minute runtime. The few talking heads could have easily ended up on the cutting room floor and for a film about a provocateur, a man who desperately tried to expand people’s consciousness and conception of sculpture (and indeed art in general), the overall approach feels too by-the-book to be memorable. Moreover, it’s hard to shake off the feeling that if the documentary’s subject hadn’t been one of Germany’s most iconic post-war artists, Beuys would never have made it inside the Competition clique.

If you’re looking for a truly engrossing documentary, as well as some food for thought, choose to seek out Lissette Orozco’s feature film debut instead. El Pacto de Adriana (Adriana’s Pact) is an enthralling piece that could very well be the Panorama selection’s gem. It’s a film that had yours truly emoting to every revelation, wondering where the truth lies… quite literally. It tells the story of a revelation that occurred 10 years ago, one which causes a deep fracture in a family: the director’s favourite aunt, Adriana, is suddenly detained while visiting her family in Chile. She is accused of having worked for the DINA, Pinochet’s notorious secret police and faces horrifying charges of torture, which she denies. Armed with a camera, her young niece takes it upon herself to uncover the truth about Adriana: a truth that could exonerate or incriminate her beloved aunt.

Imagine if Sarah Polley’s Stories We Tell had taken a more troubling turn, and you gauge the tone of this haunting documentary, which offers no easy get-outs. We follow the filmmaker through the years of investigation, not only digging into the private past of her relative but also that of an entire country that has suffered nearly two decades of military dictatorship. She manages to track down some of her aunt’s old colleagues, several of whom had colourful nicknames like “the angel of cyanide” and unearths a conspiracy of silence and a phrase her aunt keeps repeating: “Chanchi is the one.”

The resulting intrigue rivals the most immersive of conspiratorial spy dramas, and as it unfolds, the director becomes an active protagonist, gradually exposed like a raw nerve to the judgements of others. The film’s greatest strength is that through its rough-around-the-edges aesthetic, we feel that vulnerability: we doubt alongside the family and perceive the frustration engendered by Adriana. She is an unknowable figure who seems mendacious, and yet sometimes has the air of a wronged woman whose niece could be her last hope for justice. Orozco perceptively addresses the psychological process linked to survival mechanisms, and how confession can invalidate a human being. She also acknowledges the act of filmmaking: by showing the process of shooting, we understand how the camera can be a confessional tool, revealing the truth but also becoming an instrument of manipulation. This is illustrated in one of the film’s most memorable scenes, a Skype call between a frantic Adriana and her crestfallen niece, whose reflection is visible in the laptop screen, thousands of miles away. It is an unsettling moment that leads to a wonderfully judged finale.

Highly recommended and a filmmaker to keep an eye on.