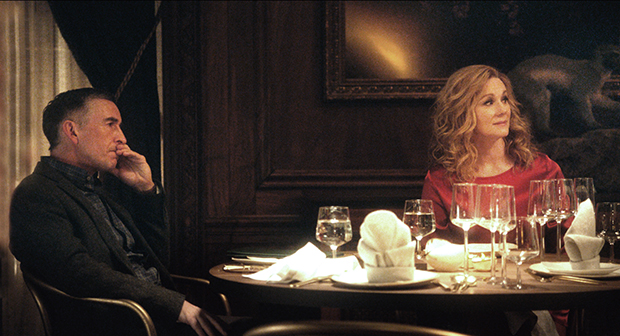 Adapted from Herman Koch’s 2009 bestselling novel, The Dinner sees Israeli-American writer-director Oren Moverman assemble a heavyweight cast for an intense but undisciplined family drama. Things start out promisingly, with Steve Coogan in fantastic form as Paul, an acerbic history teacher positively dreading an impending dinner engagement with his older brother, a slick, silver-haired congressman named Stan (Richard Gere). Paul’s good-humoured wife Claire (Laura Linney) seems adept at assuaging his neurotic leanings, and successfully ushers him out on time to Stan’s venue of choice, a comically pretentious restaurant specialising in artfully presented nouvelle cuisine. Rounding out the guests is Stan’s much younger wife Katelyn (Rebecca Hall), whose lack of poker face makes it immediately clear that there are grave matters to be discussed over the course of the evening.

So far, so intriguing. But what starts out as a taut, caustically funny chamber piece, buoyed by commanding performances, soon devolves into an exhausting, flashback-reliant family saga that bites off way more than it can comfortably chew. Over the course of two wildly uneven hours, Moverman drip-feeds details of a shocking act committed by the couples’ teenage sons, whilst erratically shifting focus between one character’s life-long battle with mental illness, another’s troubled marital history, another’s cancer diagnosis, and the central question of how the four should respond to the boys’ crime. I’ve been assured it all works brilliantly in the source novel, but on screen the constant digressions into the past only serve to diminish tension and push the film towards tedious earnestness.

The final scenes redeem things somewhat – Rebecca Hall is gifted with a glorious, show-stealing monologue, and Moverman finds a way to steer things back to the overwrought absurdity of the opening act. But it’s not enough to compensate for the formless preceding hour, which feels like an indecent squandering of the talent involved. By the time you’ve forced it all down, The Dinner is the kind of meal that leaves you bloated and in need of a long lie-down.