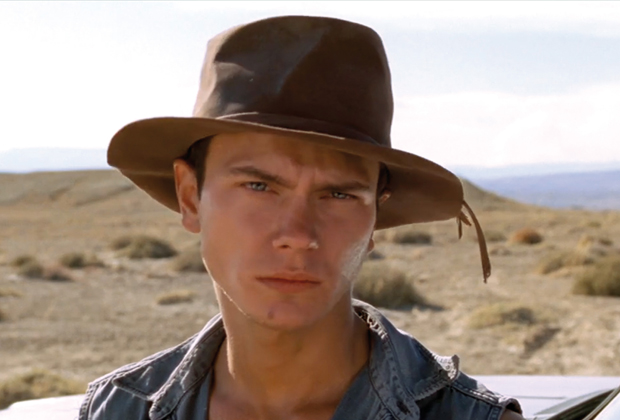 It says a lot about the intensity of the River Phoenix aura that an incomplete film released two decades after it was made should get a top billing at a major film festival. But, if nothing else, George Sluizer’s out-of-Competition Dark Blood – his “three-legged chair” as the director calls it in the narrated opening – is an excellent reminder of what an original, concentrated actor River Phoenix was until his death at the age of 23.

Dark Blood is a film whose back-story is more famous than the film itself. Sluizer, now 80, having abandoned the movie with 11 days of shooting left, was moved to return to the footage after suffering an aneurysm just over five years ago. There were rumours that the Phoenix family didn’t approve of the attempt to restore the film, and that Joaquin had refused to overdub his brother’s voice – all angrily denied by Sluizer himself.

Maybe those rumours were fuelled by the elaborate lengths that, for instance, Terry Gilliam went to in 2008, when Heath Ledger’s sad death prompted him to re-imagine the concept of The Imaginarium of Doctor Parnassus, and cast Jude Law, Johnny Depp, and Colin Farrell as new versions of Ledger’s supernatural character, making an already sprawling, disparate film even more sprawling and disparate.

As it turns out, Sluizer’s solution is as basic as it gets, and also weirdly effective. The director simply reads out descriptions of the unfilmed scenes over frozen shots, turning himself into a narrator, and making no attempt to pretend this is a complete version. It helps a lot that the ending of the story is all there – so what we have feels a little more complete than you might think. More like three-and-a-half legs.

While Phoenix brilliantly keeps his sometimes ridiculous character grounded, Jonathan Pryce and Judy Davis supply equally effective performances as the bickering middle-aged couple Harry and Buffy. After their car breaks down in the desert, they are forced to stay in Boy’s shack, eating rats and snakes as Boy keeps finding excuses to keep them there in the hope that he can have his way with Buffy, before exerting more and more physical force.

Though the film is little more than a slight three-hander, Sluizer keeps wrong-footing the audience by alternating Boy’s vulnerability with the dangerous power he has over the pompous Harry and his wife. They are ostensible victims in the situation, but often the ones committing the violence.

Meanwhile, the narrated descriptions of the missing scenes – particularly a crucial one when we would have seen more of Boy’s mysterious survivalist bunker filled with Indian totems – suggest that this could have been powerful film indeed.