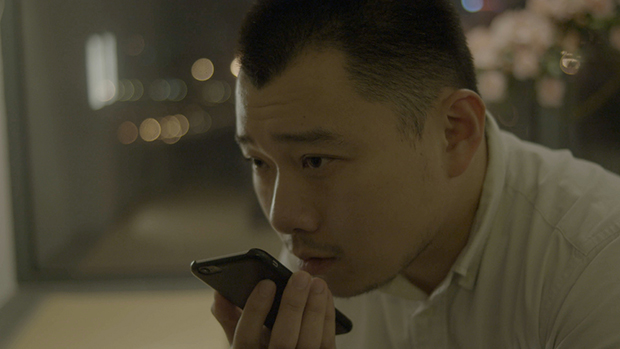 A Panorama stand-out this year is Sophia Luvara’s eye-opening documentary Inside The Chinese Closet.

Shanghai-based architect Andy has come out of the closet, much to the distress and shame of his father; Cherry is a lesbian and her family, who are a part of rural China, can’t accept her homosexuality. Both are burdened with the pervasive traditional values that govern their family’s lives and the only solution is to seek out marriages of convenience.

The director takes us through the standard fake marriage fare and then gives us a compelling inside look into the lives of two courageous people, who chose to candidly talk about their place in a society in which homosexuality is no longer illegal but being straight is considered “biologically normal”.

I met director Sophia Luvara to talk about her unique documentary.

How did you find out about the film’s subject?

I was travelling in China in 2009 and I thought that there was no real gay scene. I was wrong and started going out with gay friends in clubs. I was asked if they could take pictures of me with them, pretending to be their girlfriend so that they could send it to their families. I thought “sure, why not” for the first guy… And then there was a second guy… And by the third guy, I said to myself: wow, this is a thing! I started to find out about these wedding markets and how everybody wants to have a fake wedding. I then came back to Europe and pitched the idea at Leipzig festival.

Was the pitch picked up straight away?

People loved the topic but many were sceptical because as an Italian, who lives in London, who doesn’t speak the language and who wants to make a film about people who don’t want the world to know that they are gay and lesbian, they thought that I was never going to be able to make this film. You can’t blame them!

How did you find the two main protagonists of your film? Had you met them during your previous trip?

No. I got back in touch with people that I knew and started to work with a researcher. We saw so many people before meeting somebody who really wanted to be in the film, for obvious reasons. We went out partying every night, created online profiles in order to meet as many people as possible. That took a long time.

The research was about two years. We started production in 2013 and it was all in the can last February.

What made you choose Andy and Cherry?

For Andy, I chose him because he’s such a lovely person. He was looking desperately for a woman and he was under pressure: something had to happen quickly and that was good for the storyline. As for Cherry, that was by chance. I met her one night and she told me about her story, how she was looking for a baby on the black-market.

Once you were there, how did you convince them to share their stories? As you said, they don’t want everyone to know about their homosexuality…

They never gave me a straight answer but I think the reason they wanted to be in the film was because somehow, it was a way of forcing themselves to come out and to be open about it. This is what I think, but you never really know what people’s reasons are to take part.

The enormous pressure they both feel from their families transpires very clearly in the film – you often hear Andy’s father using the “we”: “What are we going to do about this?”

Yes. I am from the south of Italy, Calabria, so I’m very close to my family, but when I saw this, I was shocked. I understood that getting married and having a baby is like having a job: it’s something you have to do. There is no such thing as “I’m falling in love and maybe we’ll get married.” Everything is practical, pragmatic and codified. You have to conform and if you don’t, it brings shame upon a family. The one-child policy doesn’t help, because all the people around 30 years old are now single children, who represent the only chance for their parents to have a grandchild. Also, from a financial point of view – since they don’t have a pension system in China – the child needs to take care financially of their parents. The pressure is strong.

Are there interviews or stories you didn’t get to include in the final cut?

I have a lot of amazing interviews, many I didn’t get to use. Some stories were very tough to listen to, especially for lesbians: they are forced into marriages with straight men who don’t know that they are gay. The thing is, I didn’t want to take away the focus from the two characters.

Considering it’s such a thorny topic, did you face any pressure or have any troubles with the authorities?

We touched very briefly on the black-market for children in the film but I didn’t want to get into investigative journalism territory. It was important to glimpse that aspect though. We didn’t have problems but we had to be very careful. At the beginning, we applied for a visa to shoot properly, with all the permissions, and it got rejected because of the sensitive subject matter. The Chinese government did not want us to make a film about the gay community. That didn’t stop me: I went there on a tourist visa, used a small camera and never took out the tripod. It worked quite well!

Once the film was completed, did you go back and watch it with Andy and Cherry?

Andy came to Amsterdam where I was editing, so I got to show him a very rough cut. The first thing he said was “I look fat!”, but he liked it. That was important for me, because he trusted me so much and it was quite stressful for him. As for Cherry, I sent her a link and she watched it in China.

Tell me about the Berlinale – when did you find out that the film was going to be selected for the Panorama section?

Quite late, about a month before. We were thrilled with the news and even more thrilled to hear that we were nominated for the Teddy Award. The audience at the premiere were amazing and the experience has been wonderful.