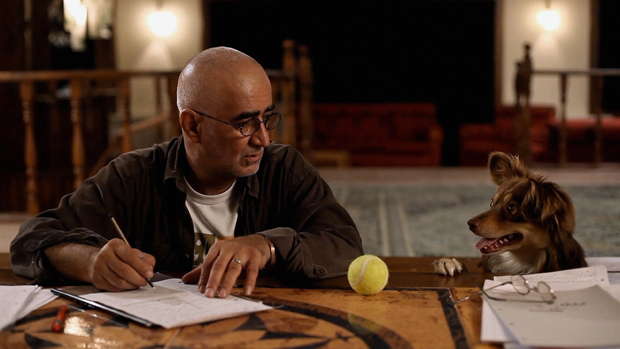 The 20-year ban on filmmaking that Iranian director Jafar Panahi received from the Ahmadinejad government in 2010 inflamed the international artistic community, turning Panahi into its cause célèbre. Already the next year he violated the ban and shot a documentary of himself at home with his iPhone. Entitled This Is Not A Film, it was smuggled to Cannes and received critical praise the world over. Two years later, he repeats his defiance, this time bringing a clandestine film to the Berlinale. Closed Curtain, which he co-directed with his long-time friend Kamboziya Partovi, premiered in Competition yesterday and although the Federal Government appealed directly to Iran, it was unable to get Panahi’s travel embargo lifted for the festival. Just like the chair that was left symbolically empty when he was a member of the international jury at the 2011 Berlinale, so too the central seat in the best row of the Berlinale Palast, always allotted to the director of the film premiering, stood empty in his honor.

Closed Curtain’s opening establishes the film’s tone and self-referential focus: from the inside of a house, a long stationary shot depicts the view through the bars of a locked window gate where in the distance, inaccessible, lies the wide open sea and the world beyond it. A screenwriter (Partovi) on the run from unnamed authorities locks himself in the house with his dog and hangs up black curtains over all the windows to avoid being detected. One night a girl (Maryam Moghadam) and her brother (Hadi Saeedi) arrive at the house, demanding refuge, as they too are being persecuted. The screenwriter is scared and only reluctantly lets the girl stay while the brother runs off looking for help. There is something peculiar about this girl, who torments the screenwriter and seems to vanish and reappear randomly. Eventually she rips down all the curtains and all of a sudden there are posters of Panahi’s films The Circle, The Mirror, and The White Balloon (all prize recipients at various international film festivals) on the wall and Panahi himself steps in front of the camera.

From this point onwards, the boundary between reality and fiction becomes blurred – Panahi plays himself, the girl remains his fictional creation, and Partovi oscillates between his real life self and the character of the screenwriter. As this switch comes completely unexpected about halfway through the film, it takes some time to figure out. Eventually, it evolves into an intelligent and keenly felt if sometimes overly cryptic reflection on Panahi’s situation as an artist haunted by the ideas and characters to which he is forbidden to give expression, a predicament that sinks him into depression and confronts him with suicidal considerations.

Without knowledge of Panahi’s real life story, the film would be all but incomprehensible. Even with the adequate background, it is a highly conceptual experiment that necessitates thorough post hoc analysis to grasp a lot of the import and symbolism. Nevertheless, considering the minimal means at Panahi’s disposal – aside from the single setting, the film was shot on a 5D camera and with a tiny crew of friends and supporters (Panahi and Partovi even divided boom-operating responsibilities) – and the fact that everyone involved participated not only out of artistic and political conviction but also at great personal risk, it is an admirable testament to the significance of art and a stirring demonstration of its indomitability.