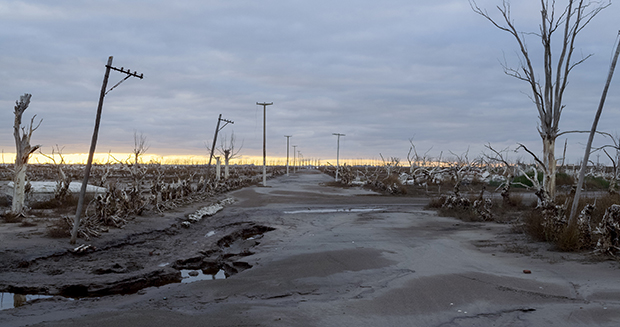 Did you ever watch The Walking Dead and think this would all be much better without the zombies or the actors with guns or any of that stuff about viruses, because it’s the sets you liked the best? Did you ever just want to watch a film that gives you space to think about post-apocalyptic emptiness?

And what if the apocalypse is already here? What if it’s already creeping in via the places we abandon: old halls, offices, battleships, bunkers, theatres, and shopping malls. You could say that Nikolaus Geyrhalter’s new film Home Sapiens (Forum) is slow, but that doesn’t convey how unique its approach to time is. The film is virtually motionless, because all you see is stationary images of dozens of abandoned, man-made places exposed to the weather – in the rain, in the wind, in drifts of snow and sand. Every now and then a clutch of pigeons will loop around inside a cooling tower, or a frog will crawl among the weeds on the floor of a shop, and there will be flies buzzing in your ears (the Dolby Atmos Surround Sound earns its keep in this movie), but mostly your own brain contemplating a blank world is the only living thing you are aware of.

What you definitely don’t see are a single one of the creatures mentioned in the title – or any evidence of their lives going on, no motorways or ships in the distance or the noise of planes overhead. This is a film that deliberately suggests the world after our extinction, a vision of the future filmed now. Apart from the odd recognizable image – Fukushima appears, along with those boats that the 2011 tsunami dumped in the middle of fields – the film offers no contextual information on how these places – a cavernous communist hall, say, or a pile of cars in a cave – came to be abandoned. At times, you can try to guess the locations from visible scraps of language, but Geyrhalter has worked to alienate everything as much as possible – indeed, he revealed in the Q&A that he occasionally removed graffiti and man-made ambient sounds in post-production, which irritated some spectators who must have decided they were watching a documentary.

The sheer stillness of the film does have a soporific effect, but I learned that waking up after a 10-minute power nap to be confronted by a pile of cattle skulls in a massive warehouse actually enhanced the enthrallment of it all. Possibly this is the ultimate film for people who hate people.