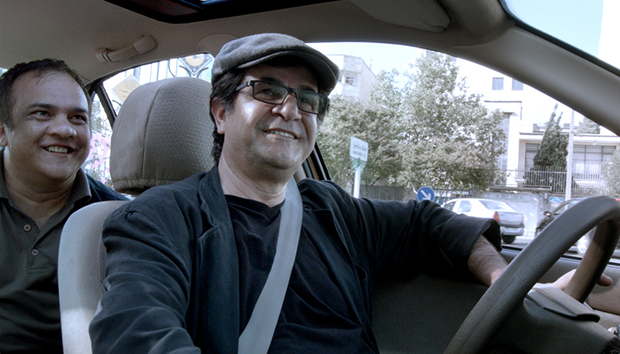 Existing in artistic limbo since the Iranian government banned him from making films following his support of the Green Movement in 2009, Jafar Panahi’s work returns to the Berlinale with another film made under conditions variously described as house arrest or suspended sentencing. In 2013, Pardé (Closed Curtain) came to the Berlinale under a veil of secrecy (as did this year’s film, Taxi). It won a Silver Bear for Best Script – Panahi’s second after the 2007 Grand Jury Prize for Offside.

The fact that Panahi is able to work at all – albeit ‘illegally’ and under almost intolerable conditions – must be attributed to massive international support from politicians and artists, including Kosslick’s, whose decision to bring Taxi to Berlin has delivered an early candidate for a Silver Bear – for Best Script, at least.

Opening with a shot of a stationary taxi facing a busy junction in Teheran, Panahi plays himself: a director-turned-cabbie with a dashboard camera, denying the official dictum of creative immobility as he starts the car and noses out into city life. He gathers and unloads an assortment of guests who talk amongst themselves and with their driver on topics ranging from playful cinematic meta-banter (invoking Panahi’s own Mirror, Offside and Crimson Gold as well as work by Kurosawa, Allen and Ceylan), official guidelines for filmmaking, Sharia law, the implications of constant surveillance, contemporary human rights abuses (the case of volleyball fan Ghoncheh Ghavami) – and mystical goldfish.

Given Panahi’s situation and his defence (verbally and artistically) of realist aesthetics, mention of his situation is perhaps inevitable. Yet discreetly done. And this downside is essential, offsetting moments of great humour and satire, and an often light-hearted, dialogue-based script delivered (presumably) by friends and colleagues seamlessly dipping in and out of a docu-fictive guessing game. The camera too, is surprisingly creative, showing and deliberately eliding artistic responsibilities and opportunities. The ending, involving aforementioned goldfish, is pure drama. Is this goldfish a metaphor for Panahi, an allusion to the artist’s role as proverbial canary in the coal mine? It’s one interpretational possibility of many. This alone is testament to Panahi’s geniality.

The politics of protest in Iran are explored in very different form in Paridan az Ertefa Kam Ukhra (A Minor Leap Down) which opens with thirty-ish Nahal leaving a doctor’s office. The baby she’s carrying is dead and Nahal makes several efforts to break this news to her family. “What’s wrong?” they ask her without giving her time to answer, so Nahal keeps her secret, and her dead baby. On a visit to the doctor who’s treated her previously for depression, she deftly turns the tables on a society whose flat/car/family-obsessed middle-classes create their own form of status distress. “You’re also depressed,” she tells the doctor. “What are you taking?”

It’s the beginning of a minor revolution of small transgressions: deliberately bumping her husband’s car, a friendly ‘unsupervised’ exchange with mechanics, the purchase of an expensive dress. Director Rajabi captures this process in short, two-to-three shot scenes filmed within the tonally and spatially restricted interiors of flats, cars, shops. Using a stabilized camera to keep this process quiet, he closes in on a woman who escapes by moving inside to find the value of resistence. Absorbingly rendered by Negar Javaherian, the character of Nahal translates into calm determination and temperamental acuity in a wonderful lead actress. If you can’t take a Taxi, make A Minor Leap Down: it’s equally rewarding. Better yet? Try both.