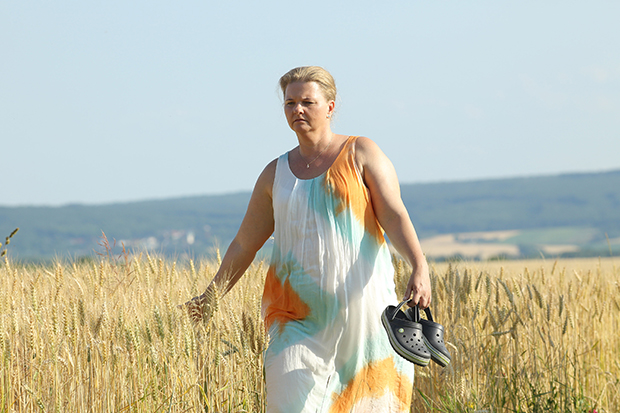 Every culture has its idea of the hereafter and the Divine, its way of explaining our purpose and life’s transience. These existential questions of course also make for potent subjects in filmmaking, to be approached from very different angles.

The Japanese competition entry Ten no chasuke (Chasuke’s Journey) pictures heaven as a place with an army of writers who pen the destiny of every living soul on scrolls, to be followed through down below. Which is why somebody who serves these hardworking authors of fates tea every day and gets a peak at the stories they come up with, would know how each of us came to be and where we will end up. As the tea-serving Chasuke finds out that one of his favorite “characters” is going to die an immanent death and decides to intervene, all kinds of madness ensues.

The easy hook and wonderful quirkiness of this premise is evident. So even when the movie doesn’t start off looking very appealing – yellowish, steamy, coarsely photographed – you still expect to be swept away by something intricate or profound. Director Sabu more or less delivers on that promise in the first half hour, as the protagonist arrives on Earth and calmly recounts the peculiar backstories of the people he meets. Not only veritably funny, these anecdotes play with the notion of a scripted life and become even more intriguing with the possibility of an intervention.

Sadly, the movie doesn’t seem to know where to go from there, introducing a series of contrived, ineffective plot developments and some truly wild mood swings. From screwball comedy to hardcore violence and unabashed romance, the narrative focus and the tone of the picture are just all over the place. Collapsing steadily into meaningless farce while still not looking particularly pretty, the last act of the movie is characterized by a stratospheric level of ridiculousness. Whoever wrote this hopefully did not come from Heaven.

The Austrian deity, on the other hand, doesn’t seem to have a plan for its subjects. In fact, when supermarket cashier Gabi, after spending the better part of her life in unquestioned mundanity and now all but set for retirement, actually pauses to think about the meaning of it all one day, panic threatens to uproot a lifetime of false contentment.

Written and directed by Karl Markovics, Superwelt (Superworld), screening in the Forum section, is a thoroughly observant, quietly affecting film about seeing past distractions and being truly aware. While there is an uncomfortable whiff of new age-y spiritualism in the story, overall it captures a sense of void and dread felt by someone trapped in the unbearable neatness of a suburban existence brilliantly. Sprinkled with comedic interludes that are as funny as they are insightful, the film exposes the tragic hilarity of being and the flimsy hold we have on sanity. Anchored by a magnificent lead performance by Ulrike Beimpold, whose facial expressions – by turning quizzically, desperately and calmly blank – are a constant revelation, the cast boasts great versatility and unlabored authenticity, complementing one another to delightful effect.

Shot with minute attention to the associative power of images, the movie is thoughtfully, deliberately framed and lit, using strong contrast to provoke and suggest. Although the muted ending isn’t quite the home-run one would hope for, this gem of a cosmic protest surprises with how much it has to offer.