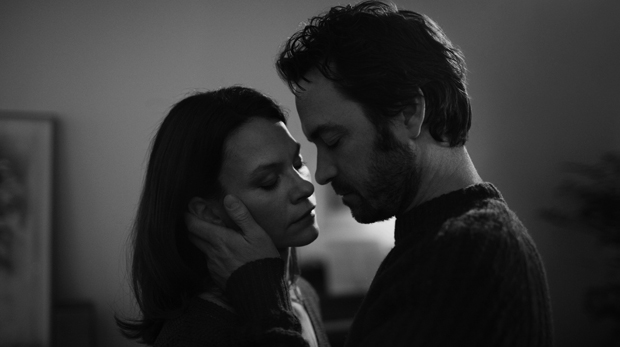 The crooked timber of humanity doesn’t get much more bent out of shape than in one of the most extraordinary films in this year’s Berlinale: French-Canadian François Delisle’s Chorus, which brings together a couple that went its separate ways 10 years ago after the death of their only child: an eight-year-old boy. Incarcerated for other crimes, a pedophile criminal confesses in prison and shortly after kills himself. But the child’s body is found and his still grieving parents reunite to carry out what needs to be done: a funeral, one last talk with the detective, a farewell.

By rights, this should be a hard film to watch. At moments, it is. Irène has stayed in Canada and come back to a strained form of normality by rejoining her professional life in a polyphonic choir. Christoph can only assuage his sorrow near the sea and has moved to Mexico. They come together in the depths of a Canadian winter to offer each other whatever they can in the way of comfort, all the while drawn to new and old forms of escape.

Filmed in vibrant, deep-focus black and white, Delisle’s use of an essentially binary scheme to form sites of binary sorrow merges chamber piece aesthetics with a bare-bones script and meticulous interior mise-en-scènes of carefully internalized lives. Against this restraint, moments of release burst across the screen like rockets: a closing rave party scene stands alone as a lesson in how to reconfigure the shards of an old love into a new, brittle whole. A Sundance hit, Chorus will hopefully follow up on this success with similar levels of critical approbation in Berlin.

Polish director Małgorzata Szumowska returns to the Berlinale with a Competition entry Body (she was here previously with the underwhelming Elles – in 2013 Teddy winner W imie). Love here is also experienced as the pain of absence: that of the baby lost to Anna, a sympathetic therapist who works with eating-disordered girls whilst pursuing sideline work as a psychic. It’s also the absence of Helena, wife and mother respectively of poll-bellied State Prosecutor Janusz and the weight-challenged daughter Olga – also trying to make herself absent. When Janusz delivers Olga into the clinic, their paths cross with Anna’s hodgepodge of therapy and supernatural beliefs.

In creating this mosaic of body-mind related issues, Szumowska keeps the narrative situational, using atmospheric colour to suggest the comfortable recesses of Anna’s flat and the peace she’s achieved (delusional or not) as well as the stark desperation of emaciated girls in a bleakly white room against whose walls their devastated physiques attend Anna like angels. Editing is also key to a situational patchwork with many scenes consisting of a few, very short takes combining to create a sense of disconnection amidst a longing for meaning. And for love.

And if we end up accepting the power of wishful thinking, then perhaps also and above all because well-placed moments of hilarity constrain the cynicism: on-screen and off. The film opens with a presumed suicide being cut down from a tree. His body flops heavily onto the earth then rises like Lazarus and wobbles uncertainly back to the city. Szumoska follows the metaphor of loss finding its way back to life but opts out, in the end, for the love-is-the-answer solution we all expected anyhow. So while her variant on the equation between absence and acceptance is entertaining and provoking, it’s a far cry from the polyphonic resonance of Delisle’s Chorus.