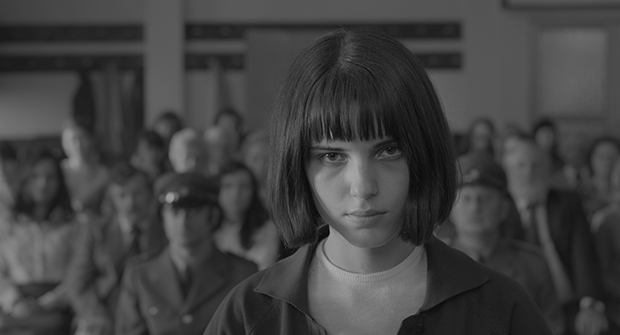 The 66th Berlinale kicked off with the Coen brothers (or Coen cousins, if we’re to believe George Clooney’s press conference revelations) and their satirically wacky look at 1950s Hollywood. It’s now time for the Panorama programme to inaugurate its selection with a moody Czech / Polish / Slovak coproduction.

Set in Prague in the early 1970s, Já, Olga Hepnarová (I, Olga Hepnarová) is based on the true story of a figure that went down in the annals of history as a murderer who killed for “future tolerance”: the last woman to be executed in Czechoslovakia.

The first half of the film follows the 22-year-old drifting despondently from job to job and steadily puffing her way through the country’s tobacco reserves. She feels persecuted by the world and attempts to form emotional connections by exploring her lesbianism, without experiencing much pleasure. First time filmmakers Tomáš Weinreb and Petra Kazda focus on the surface rather than the substance in this half, with a series of fixed-camera vignettes.

It’s only at the halfway mark with Olga’s ‘J’Accuse’ letter that the mood piece gains momentum and the form ceases to eclipse the content. This also allows the young Polish actress Michalina Olszanska to delve convincingly into the character’s psyche; she goes from looking like a hunched Natalie Portman to a commanding, vengeful presence.

Special mention must go to the black and white cinematography, courtesy of Adam Sikora, who imbues every frame with a removed, austere crispness. The beautifully filmed sex scenes in particular deny the audience any intimacy, mirroring Olga’s isolation and her self-description as a “sexual cripple”. The oppressive absence of a musical score is also judicious, furthering the feeling of disconnection, which goes so far as to make even the culminating murder feels disconcertingly distant.

Although Weinreb and Kazda’s script contains some subtle foreshadowing, the languorous pace and tardily introduced themes of martyrdom, the struggle between active and passive, as well as talks of a society “too sovereign to condemn itself”, arrive too late to fully satisfy. Nevertheless, Já, Olga Hepnarová is a bleak biopic worth seeing and more than counterbalances today’s Coenesque quirkiness.