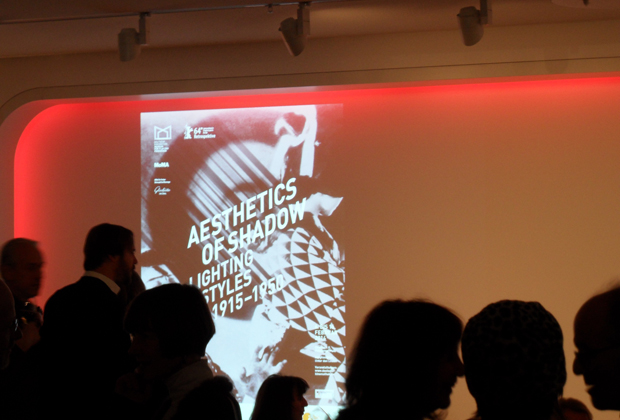 There isn’t normally a lot of blood on the walls at the Berlinale Retrospektive drinks reception. You don’t see inflated academic egos suddenly lashing out at each other. And if you visit the toilet, there’s also a definite absence of addled film archivists feverishly wrestling over crumbs of ketamine on the floor. What you get here is a crowd of middle-aged, long-haired, be-cardiganed film historians who live under a private prohibition on male grooming products earnestly debating the latest digital enhancement of The Cabinet of Dr. Caligari and snaffling the free wine. Many of them for some reason smell of carrots.

But this year, I sensed a ripple of discontent in the herd on the fourth floor of the Film Museum. The assembled academics wouldn’t quite settle down to graze on the freely available cheesy pretzels. They kept glancing anxiously over at the poster, emblazoned with this year’s theme: “Aesthetics of Shadow. Lighting Styles 1915-1950”. Hm. Now what the hell does that mean?

I ambled breezily up to a small rotund man with a blue jumper and a flake of crusty cheese clinging to the corner of his mouth. I challenged him: “So, what’s all this about the ‘aesthetics of shadow’? What film doesn’t have shadows in it?” He looked at me uneasily. “That’s what we’ve all been wondering too. I have to admit it’s a pretty wide category.” “Wide? Every film I’ve ever seen had shadows in it. I haven’t checked but I’m pretty sure.” A sweat broke out on his upper lip. “I can’t talk to you anymore. I didn’t say anything,” he said, and scurried off towards the Riesling.

This wouldn’t do. I buttonholed Retrospektive boss Rainer Rother. “Here, mister,” I said, menacingly. “What’s all this ‘lighting styles’ bollocks? Have you ever seen a film that didn’t have a lighting style? Aren’t you just making this stuff up as you go along? Don’t you, in fact, just randomly pick old classics and then come up with a title? How much do you earn anyway?” He launched into a long explanation, all about a technical cinematic innovation supposedly invented in 1915, which allowed the use of artificial lights in films. “It’s the most popular Retrospektive we’ve ever had!” he added, defensively. “People keep telling me how great it is.” “Hang on,” I said, manfully thrusting through his obfuscations, “so the common theme is films where they used lights? As in, any film ever made?” “Any film after 1915, yes.” “So why does it stop at 1950, then?” “It has to stop somewhere, doesn’t it? I mean, we can’t just show every film ever. That would take ages. Also, in black-and-white films the aesthetics were definitely more about light and shade.”

So, the theme for this year’s Retrospektive is “black-and-white”. Hopefully next year they do a Retrospektive for colour films. And I hope they pay me to pick them.