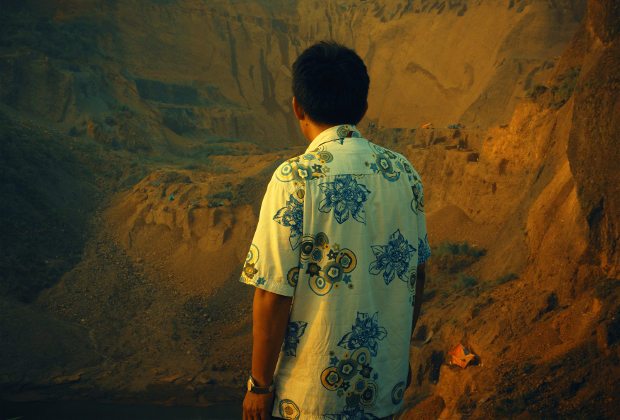 Imagine a single, four-hour shot made by poor miners in a Burmese village. They film themselves breaking rocks with a pickaxe and then smoking opium from a water bottle bong. That would be a hell of a movie!

Fei cui zhi cheng (City of Jade) isn’t exactly that film, but almost. The four-hour shot was not included in the final cut. But the two-hour film was assembled out of similar material.

Midi Z, a Burmese director of ethnic Chinese origin who lives in Taiwan, directs a documentary about his older brother working in Burma’s jade mines. The rugged men in their improvised huts make up a scene not unlike California during the Gold Rush – except everyone wears flip-flops and yells into mobile phones.

Jade is a big deal in Asia accounting a large part of Burma’s GDP. An ongoing war between the Burmese military and the Kachin Independence Army (KIA) means that the big mining corporations have disappeared from the “City of Jade”. The void they left is filled by speculators with hand tools and, if they’re lucky, a jackhammer. Z’s brother hires a few workers and tries to make his fortune.

This film is not good by any technical criterium. Long shots taken with a GoPro on a bumpy motorcycle ride – while most of the audience reads subtitles during long monologues – could easily cause motion sickness. But many images still draw you in. The color saturation is turned up to 11: rusty red water, poisonous yellow fog, and – occasionally – deep green jade stones are everywhere. A sharp contrast to the film’s gray vibe.

Our protagonist spent 22 years in the mines searching for riches. He ended up poor, addicted to opium, and in prison. Now that he’s been released, and about to turn 50, he insists that he can’t leave until he finds that one big stone that will make him rich. Staring at the horizon, he admits to the camera that virtually no one accomplishes the dream. But he has to keep trying.

Midi Z has gathered some amazing material. When he gets sick with malaria, the miners take over filming themselves – providing, among other things, the one shot that lasts four hours. “City of Jade” includes lots of unprofessional footage, like home movies of the poor.

Using the same footage, Z created a totally different documentary that was shown in Rotterdam last year. His brother originally didn’t want to be a star because he didn’t think his story was interesting. “He thinks movies are only things like Jackie Chan makes,” Z explains. But the brother has given us a powerful image of hope within hopelessness.

Maybe he’ll make a third film with the footage. I’d see it.