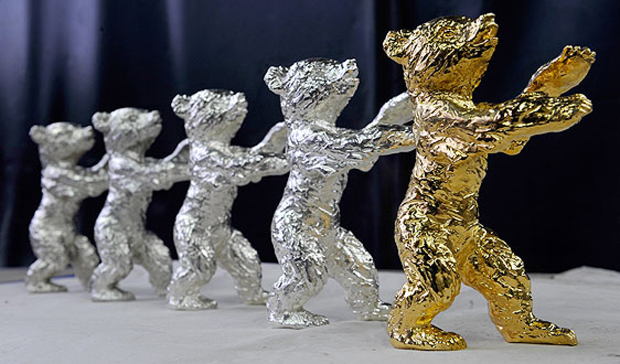 The bears are on the prowl: we saw one yesterday outside the Starbucks near the Berlinale Palast. It wasn’t golden, though, or even silver. Just off-white. Unwashed and confused, like the rest of us.

So what else is new? As Exberliner’s film/blogger team sat down to discuss our prognosis for this year’s awards ceremony, there were some furrowed brows. Just because we had serious misgivings about a couple of potential winners (Victoria, Under Electric Clouds), doesn’t mean that their artistic clout in a given field (editing, umm, for Victoria’s one-take heist narrative? Script for the Malick?) might not bait a bear in special category – if it serves a filmic purpose.

It always helps to remember that there are no critics on the jury: just film people, and film business people, who don’t really like critics that much. Peruvian director and 2009 Golden Bear winner with her debut film Milk of Sorrows Claudia Llosa sounded the anti-critical bell: “I know what it’s like to be on the other side” said Llosa. Tatou stopped reading critics a long time ago and for her the jury doesn’t vote against, but for something. So according to Audrey, “there is nothing which should be painful, or unfair” in the voting process, whilst Daniel Brühl thought the whole thing might be incredibly tough and said he’d probably be drinking less than usual. And what about Jury President Darren Aronovsky: “Competitions are so subjective… it’s about being truthful and seeing what you feel,” which could include small films ”that sometimes have hard time creating a space in today’s insane world”. Bong Joon-Ho, film director from South Korea said he really liked the first film that he’d seen: “was I not supposed to say that? Oh! I’m ready to enjoy the other movies though.”

So, let’s recap: feelings are important, and so is honesty, and so is fairness and so are first impressions and so are small films. And sobriety. Based on these criteria (and a few of our own) we’d like to venture the following.

Golden Bear for Best Film: Taxi by Iranian dissident director Jafar Panahi. It’s a small film, it showed early, there’s no drinking either in the film or in Iran (officially) and the film is full of political honesty and heart-warming at the same time. And it’s just outstanding cinema. Bingo!

Silver Bear Grand Jury Prize: Ixcanul. Aronovsky singled out this “first film from Guatemala”. Again, it’s a small and brutally honest movie, showed early on, and has great and emotionally forceful performances from the two female leads. Also: drinking too much is bad and can lead to unwanted pregnancies.

Silver Bear Alfred Bauer Prize for a feature film that opens up new perspectives: Victoria. The one-take gizmo isn’t actually really new but it works here as a real-time accelerator of a small, nastily honest narrative. And again, drinking and general consumption of intoxicating substances get’s a bit of a thumbs-down.

Silver Bear for Best Director: Pablo Larrain for El Club has gone anti-mainstream with his yes, brutally honest, indictment of Catholic depravities but doesn’t chuck out the baby feelings with the bathwater, leaving a loophole open onto the quest for genuine faith. Oh, and drinking red wine is shown as a degenerate parody of Catholic rites.

Silver Bear for Best Actress: Charlotte Rampling in 45 Years. Also rather petite in scope and tells the story of what can go wrong in a long-term marriage as a process of self-awareness. So honesty? Tick. Drinking … not so much but one of the main characters does start to smoke again and it doesn’t end well for him.

Silver Bear for Best Actor: Elmar Bäck as Sergei Eisenstein in Peter Greenaway’s Eisenstein in Guanajuato. A: he was pretty good B: the sex scenes were very brave. C: Drinking – purely social.

Silver Bear for Best Script: Aferim. Another small, art-house movie, there’s a lot of talking and most of it is pretty much to the point of the film’s main thrust: showing the mistreatment of gypsies in pre nation-State Rumania. Drinking? In connection with Dutch courage, boredom or as a sexual disinhibiter (ok for young studs, not so good for older men) so definitely wrong side of critical consumption levels.

Silver Bear for Outstanding Artistic Contribution in the categories camera, editing, music, score, costume or set design. Might just have to be Pod electricheskimi oblakami (Under Electric Clouds) for camera, which was one of the film’s better features. Drinking – none (except after the press screening, when we all needed a stiff vodka).