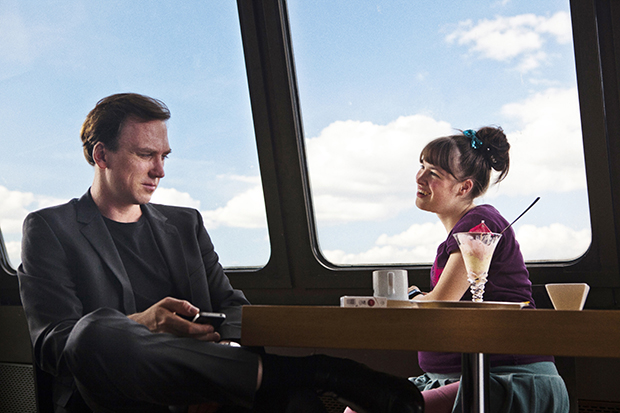 Looking for something new in Freudian spaces? (Please) don’t save your critical energies for Fifty Shades of Murky. Start with the Panorama section and Stina Werenfels’ Dora oder die sexuellen Neurosen unserer Eltern (Dora or the Sexual Neuroses of Our Parents). It begins with a special needs girl celebrating her 18th birthday. She’s given a red dress and twirls delightedly through her party. Not long afterwards, her mother decides to discontinue the medication that has, thus far, kept Dora’s personality – and her sexuality – dormant.

Dora loves red: the dress, the fingernails, the lush fruit she sells at a local stall: it’s a simple metaphor for sensuality. Showing Dora’s absorption in this most sexual of colours in vibrantly intense close-ups, Werenfels sets up her protagonist as a girl-woman with a tunnel vision onto things that please. And that includes the sex that she enjoys with a shady pharmaceuticals salesman (Lars Eidinger riding a creepily fine line between charm and sheer predation in a black coupé). Locked into the restraints of social norms, her parents are horrified by the relationship. But who’s to say how exploitative this man is and whether the well-mannered liberalism of Dora’s parents isn’t a front for other species of dishonesty? It’s a pity that Werenfels broke the spell of these carefully maintained ambiguities by involving the mother figure in an ending that opens a late door onto a new mood. But this is a minor failing in a film that stays in the mind as an unusual exploration of libidinal liberation.

This was a subject close to the heart of Dutch director Sacha Pollak’s Hemel, which won a Fipresci prize here in 2012. She returns this year with Zurich (Forum), a bi-chaptered film that begins with part II and visual delineation of Nina, a woman in crisis. Part I returns to events that led to desperation: the discovery that her relationship with a long-distance truck-driver was second fiddle to another family life. As a visually challenging experimental narrative, Zurich supplants dialogue-based exposition with a camera that shows (and doesn’t tell) a story of loss with every shot available, from the wide-angled isolation of Nina, dislocated in landscape, to the hand-held nerviness of her search for the human touch in motorway cafés and trucks cabs. Pollack’s third film establishes her as a daringly intuitive filmmaker in whose work aspects of maternity, partnership and societal acceptance bond easily and disturbingly with processes of abnegation.

Showing in Competition, first time director Jayro Bustamante’s Ixcanul is an astonishing debut. With two indigenous Maya playing mother and daughter, it tells the story (developed in community workshops) of Maria and her parents, scraping a living in the shadow of the eponymous volcano. Working a coffee plantation and farming at subsistence level, the lure of what’s on “the other side” of the volcano prompts Maria to submit to the advances of a young worker, whom she hopes to accompany to the US. Not a new story, by any means, Bustamante’s telling of the clash between traditionalism and the hope of a better life explores this conundrum at many levels: in a family context (with both actresses portraying two ends of the matriarchal spectrum in performances that are similarly nuanced and direct), at various levels of social expectation—and not least with reference to tropes of volcanoes and snakes as elements of a possessed and possessing environment.

Benoit Jacquot returns to the Berlinale, once again in the company of the watchable Léa Seydoux, with a Competition film that completes a troika of features with early 20th century heroines. Like the films presented by Coixet and Herzog, however, his Journal d’une femme de chambre (Diary of a Chambermaid) fails to conjure a fully rounded person onto the screen. Naturalist in tone and approach with a strictly point of view camera that follows chambermaid Célestine’s progress through a bigoted bourgeoisie, a flimsy screenplay is unable to flesh out a patchy, flash-back driven plot, whilst an attentively rendered mise-en-scène of the belle époque en provinces lacks narrative focus and ends up feeling more self-indulgent than self-aware.