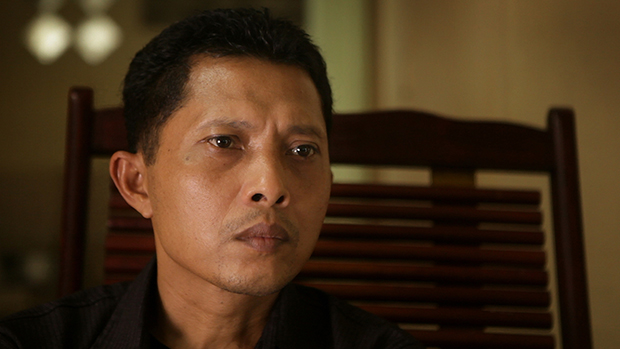 An old man laughs as he recounts the adventures of his youth for the camera: He choked one guy to death; he sliced open another so his intestines fell out; he cracked open the skull of a third – the last guy actually tried to hold his brains in.

The Look of Silence by Joshua Oppenheimer begins much like his last film, The Act of Killing, which screened two years ago at the Berlinale. Again we see the carefree reminiscences of former paramilitaries in Indonesia who massacred hundreds of thousands of actual and suspected communists in 1965. These killers have been treated as heroes their entire lives and are happy to tell their story.

After a few seconds, it becomes clear this second film is different: This time around, a witness will accompany us on our journey. Adi, a stone-faced 44-year-old, takes in the footage of these joyous confessions on a small TV. His older brother Ramli was murdered just before he was born. Adi begins to ask older people about 1965: “The past is the past” is a refrain he hears from everyone – even from one of the few survivors of the killings. When he begins to confront the murderers, he finds that the guilt – and a refusal to accept it – reaches into his own family.

This guilt reaches into the West as well. “We should get a trip to America,” one death squad leader proclaims, “since America taught us to hate communists!” In an NBC News report from Ted Yates we are informed that the communists themselves requested to be executed. Goodyear, an American corporation, is shown on NBC exploiting slave labour at a rubber plantation. The imprisoned men are being starved to death at a concentration camp – as punishment for having organized a union. As Oppenheimer pointed out at the Berlinale premiere: This was just 20 years after German companies had done the same at Auschwitz.

The film is shocking, horrifying, occasionally cathartic and consistently beautiful, starting with the image of a toothless old man in giant red glasses. Even though Oppenheimer is telling a political and moral story, it never seems like a journalistic report. Dramatically and artistically, the film seems so perfect that some critics speculated it must have been staged. In reality, the director gathered over 1000 hours of footage in order to craft this story of a society that hasn’t been allowed to process a terrible trauma.

While the perpetrators are garrulous, the Look of Silence of the title belongs to the families of the victims. Adi’s older mother sits in a tropical back yard cutting bright yellow fruit – an image that I, as a tourist, would associate with paradise. She goes about her work, caring for her blind, deaf and senile husband, mourning her son and waiting for justice in the afterlife. Adi confronts the murderers, but mostly just listens to the excuses and the lies. He represents us as observers. Most of us will have never heard of this massacre until the last film, a massacre that happened in a place that provides much to the Western world. What horrible crimes could have taken place in some of the other countries that provides our food, our clothes, our car tires?