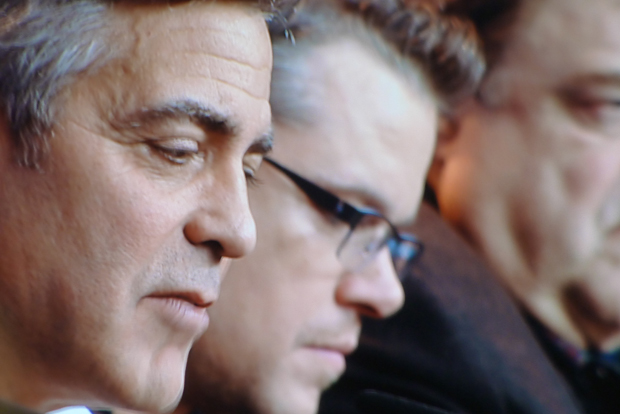 Journalists stop being journalists at press conferences. Especially film journalists. Especially at press conferences with Hollywood actors. In fact, I think everyone would be better served if we dropped the false dignity conjured by the words “press” and “conference” and replaced them with the words “sex-starved” and “melee”. At least then you’d know what you were in for. And you wouldn’t need to bother with the pretence of press badges either. Then again, today was GEORGE CLOONEY DAY at the Berlinale, and there are no days in all the media calendar when the press accreditation is a more mendacious privilege.

Once you’ve accepted this, it becomes easier to swallow the choking, stomach-twisting embarrassment and enjoy the spectacle of George Clooney Day. Just remind yourself every now and then that there are film journalists with sound judgement and self-respect – they just don’t go to press conferences. The Mexican correspondent sitting next to me in The Monuments Men screening, for instance. He leaned over to me during a break for some reporter to have a minor heart attack (true story) and said, “Typical gringo film.” My new Mexican friend left before the end, particularly irritated by the fact that in one of the early scenes supposedly set in Paris you could see Berlin’s famous Schinkel statues. He reckoned that a particularly ignorant goof for a movie about art historians. This succinct assessment was only topped by The Washington Post‘s already legendary “puppies” review – which says the same thing in a different way.

In the sex-starved melee, meanwhile, a Bild reporter quizzed Matt Damon about hangover cures, someone asked George if he had anything to say to the people of China, a German reporter, speaking on behalf of the German people, wanted to thank George, listening on behalf of the American people, for the return of that famous German artwork the Nefertiti, and a breathless Mexican reporter (not the same one) informed George that not only did he feature in many women’s erotic fantasies, “you are doing something nice for the mental health of many women in the world. Especially Mexican women.” Not sure what she was getting at, but I agree that mental health is definitely an issue on George Clooney Day.