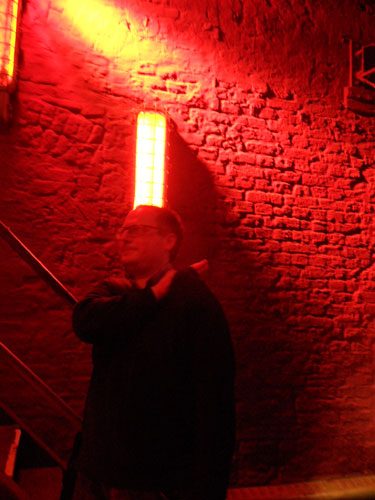 I mainly hate parties. But surprisingly this has only partially hampered my duties as Exberliner’s Official Berlinale Party Correspondent. It’s not a very hard job. It’s definitely not like being a miner or a nurse. This is now my third hungover post (also only a minor impediment, it turns out) having dragged my social inadequacy through five parties in the past few days: there was the Nick Cave after-party, which contained Nick Cave, the Retrospektive reception, which featured free quite-good wine being slurped by a herd of anxious academics, the Festiwelt night (an umbrella for all of Berlin’s festivals) which had shouty, glittery live acts, and something in Bassy that I can only remember as noise and sweat.

It all culminated last night in a cellar on Torstraße at a party I’m not even sure had any connection with the Berlinale, but was saturated with giddy rumours that Werner Herzog’s niece would be there. This was significant, because one of the main elements of such parties is the ability to calculate everyone else’s proximity to the World Cinema Elite as quickly as possible. It’s a bit like speed-dating, except instead of getting to know each other, you have 60 seconds to gauge how important your conversation partner is and then calibrate your own level of niceness accordingly.

It can be a tricky exercise, because the general awareness that this is what is happening means that a lot of people just panic and say they are either a producer or director or actor or screenwriter. They gabble it out, like a verbal gag-reflex, in a bid to keep the other person interested for the next 30 seconds. The only response is to say that you are one of the other things in the hope that it will trump it, like a game of Scissors-Paper-Stone where you don’t really know what beats what. Then you try to out-impress your interlocutor with all the things you’ve done that had something to do with being in a film until the whole house of cards collapses and you shuffle on, having either won or lost. I suppose you could call all this quite shallow.

But as you can imagine in any possible scoring system being related to one of Germany’s greatest auteurs definitely rates you high, so high that even talking to such a person will actually increase your score with other people at subsequent parties. Thus I spent last night in a dark cellar steadily inhaling cocktails and wasabi nuts and trying to guess what Werner Herzog’s niece might look like. Unfortunately all the tall German women with an air of imperious disgust for the cheap bourgeois trappings of modern life I could see turned out not to be a relative (I asked them all, “Are you Werner Herzog’s niece?”), though I did meet an actor in a hat who had once met him and had an anecdote about how Herzog made him do an impression of himself. I left not knowing exactly if that necessarily trumped my standing-near-Nick-Cave thing. Let’s just call it a draw.